Trojans allow late touchdown in loss to no. 13 Coastal Carolina 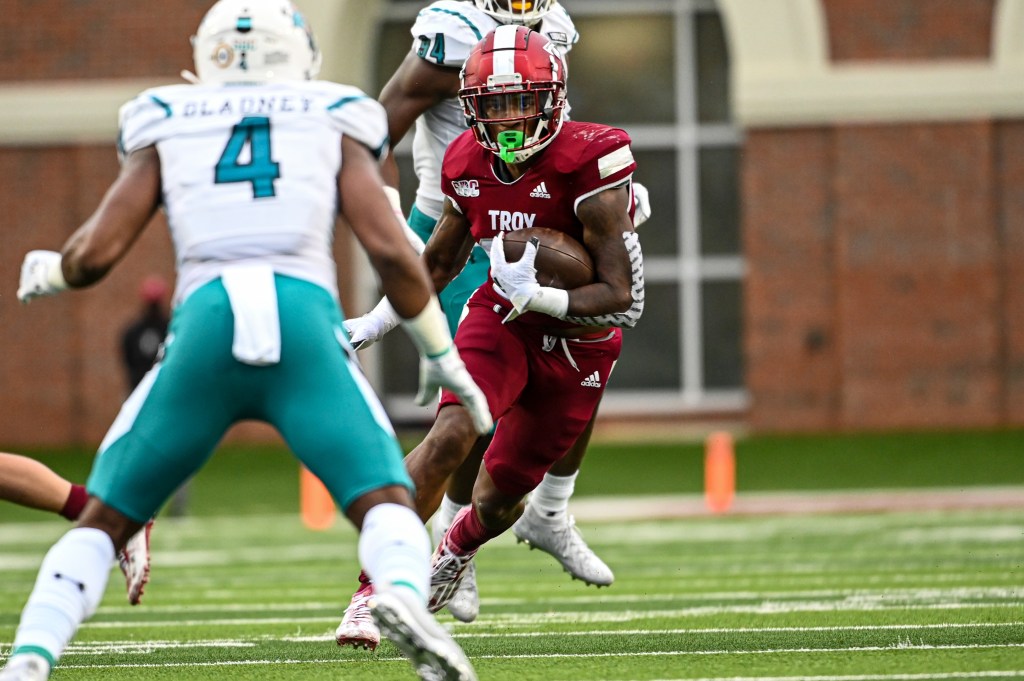 A late touchdown lifted the No. 13 Coastal Carolina Chanticleers to a 42-38 win over the Troy Trojans on Saturday afternoon.

Following a Carlton Martial interception with 2:31 remaining, the Trojans took their first lead of the game with 1:20 remaining in the fourth quarter when quarterback Jacob Free connected with Tray Eafford for a six-yard touchdown. Trailing by three points, quarterback Grayson McCAll and the Chanticleers marched 75 yards on just five plays and scored the winning touchdown on a 23-yard reception by Jaivon Heiligh.

The loss for the Trojans drops them to 5-6 on the year and 3-4 in Sun Belt Conference play.

“Came up a little short,” Lindsey said. “We didn’t make enough plays at the end. We know Coastal Carolina has a good team, but I thought we fought with them tooth and nail. “Disappointed we didn’t win, but I love how they represent our university and our people. I can’t be prouder of our group. Disappointed we didn’t finish because we really had a great opportunity tonight to make a huge impact.”

“If I knew it was easy to score we would wait to the last minute,” Lindsey said. “I’ll be honest I didn’t know that we would score on that play. They went to a man coverage and didn’t cover the wheel rout and Jacob took the touchdown. You can’t blame him for doing that. They had no timeouts and a minute and change. We need to go out and get a stop and win the game. That’s the bottom line.”

The Trojan offense scored 13 unanswered points to climb back into the game. Following a 42-yard field goal by Evan Legassey, the Trojans went to the second quarter trailing 14-3.

The Trojans pulled to within four when freshman Kimani Vidal scored his fourth touchdown of the season on a four-yard run.

Trailing 14-10, Legassey connected on his second field goal of the half, this time from 28 yards out, bringing the score to 14-13.

Marable and the Chanticleer answered when the running back barreled his way in for a two-yard touchdown.

The Trojans ended the half with Legassey’s third field goal of the half and went into the locker room trailing 21-16.

The Trojans went three-and-out on their opening possession of the second half. The Chanticleers embarked on a 16 play, 83-yard drive that took 9:48 off the clock. The drive ended with a six-yard touchdown reception by Heiligh and the Chanticleers took a 28-16 lead with 4:33 remaining in the third.

The Trojans bounced back quickly. After a facemask penalty gave the Trojans possession in Chanticleer territory, Reggie Todd caught a slant pass and rumbled his way for a 41-yard touchdown with 3:18 remaining in the quarter. After a successful extra point attempt by Legassey, Troy’s deficit was cut to five at 28-23.

With less than nine minutes remaining in the game the Chanticleers had possession on the Troy one yard line. The Trojans kept CCU out of the end zone on fourth and short when Shakel Brown and Will Choloh combined to bring down the ball carrier.

Trojan quarterback Gunnar Watson left the game when he banged his head on the turf after being hit by a Chanticleer defender on the first play of Troy’s possession. Later in the drive Free had a pass intercepted near midfield and returned to the Trojan four-yard line. The Trojans looked to have kept the Chanticleers out of the end zone again, but a pass interference call gave CCU a fresh set of downs. two plays later McCall dove his way in four a touchdown to extend the Chanticleer lead to 12.

After CCU’s final score the Trojans had one final attempt to defeat the Chanticleers, but a Free fumble ended Troy’s comeback effort.

Before leaving the game with his injury, Watson completed 25 of his 37 passes for 260 yards and had one touchdown. Free finished nine of 9-for-18 for 94 yards. He had one touchdown and one interception.

Martial became the third Trojan to rack up 100 tackles in back-to-back seasons on Saturday when he finished with 21 tackles, good enough for second most in program history.