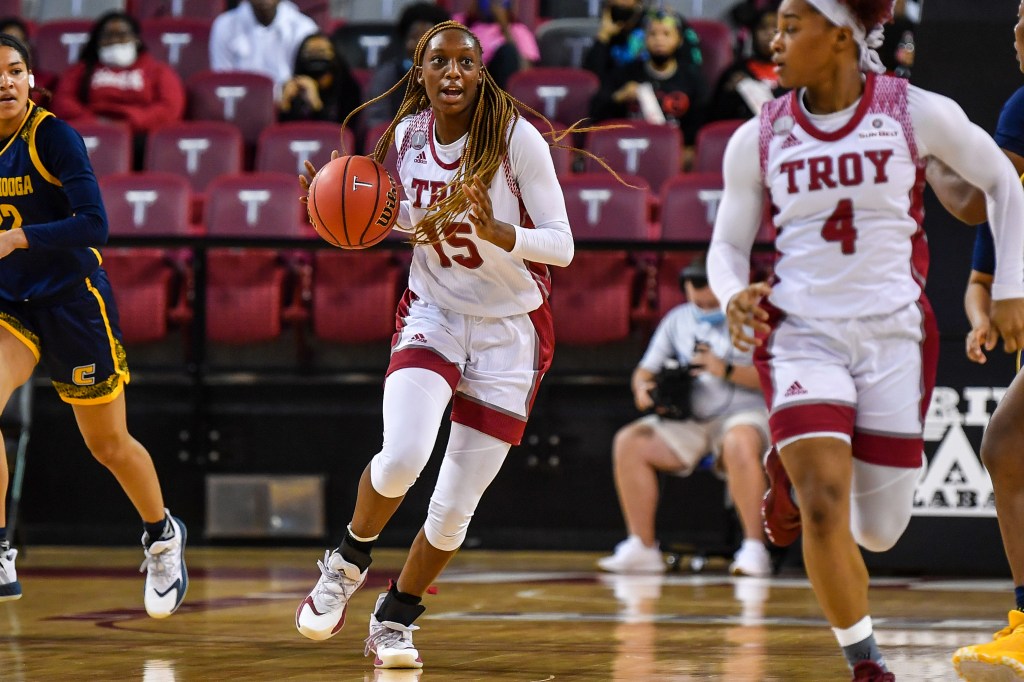 submitted photo/Troy Athletics | The Messenger Troy freshman Samira Moore looks for an open teammate during a game against Chattanooga on Wednesday afternoon.

The Troy women’s basketball team used a strong second quarter to help lift them to a 95-74 win over the Chattanooga Mocs on Wednesday afternoon at Trojan Arena.

The Trojans now have won two games in a row and sit 3-1 on the year.

“We are just really pleased and thankful for this win today,” head coach Chanda Rigby said. “Two wins in a row in this uncertainty started season it’s a blessing. The thing I am really excited about is that I am seeing improvement in every player and everything we’ve been working on in practice. We can see and almost measure the improvement. Everybody contributed so that’s always a good thing. It’s not just that everybody played, it’s that everybody came in and contributed and we can really see the vast improvement.”

“One thing that I really wasn’t betting on that is a nice surprise is that when we put our five freshmen in they are continuing to score,” Rigby said. “We thought there would be a drop off for a while until they hit a rhythm. It’s almost been a little bit of a surprise that when we put them in the game the scoring does not drop off at all.”

After falling behind early in the first quarter, the Trojans got their first lead of the game midway through the quarter when Tiyah Johnson connected on a two-point shot. The Trojans never trailed throughout the rest of the game. They went to the second quarter leading by three at 23-20.

After the Mocs made the first three points of the second quarter to tie the game at 23, the Trojans embarked on a 20-0 run and took a 43-23 lead. The Trojans outscored the Mocs 24-8 in the quarter and went into the half leading 47-28.

“I think it was our full court pressure,” Rigby said. “We got a few turnovers in a row and the other team got frustrated a little bit for a while. We were speeding up some of their shots in the first half. We had some momentum plays and that momentum started building.”

The Mocs got back to within 19 in the fourth, but the Trojans held on for the comfortable 21 point win.

The Trojans shot 44 percent on Wednesday. The Trojans had 11 different players score. Johnson led the way with 19 points. Johnson was one of four players to finish in double figures. Alexus Dye finished with 18 points to go along with 14 rebounds. Dye has recorded a double-double in three of the four games this season. Samira Moore finished with 12 points and Tyasia Moore had 11.

“Definitely the two hardest games of our season are back-to-back,” Rigby said. “Two well respected programs. Everything is going to be harder against Mississippi State. Everything we did tonight is going to be five to six notches more difficult, whether it’s a past into the post, whether it’s a rebound. It’s going to be a great experience. As far as Middle Tennessee, they have a hall of fame coach and several All-Americans on the team. This is a great battle test for us.”

Trojans will return home to take on Martin Methodist on December 20.