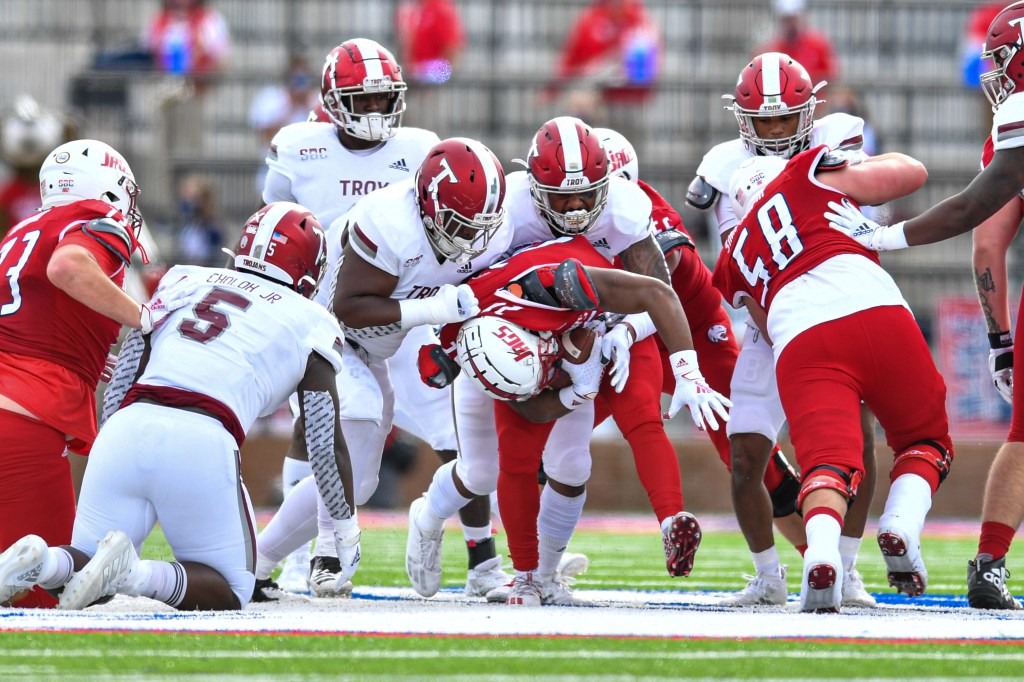 After snapping a three game skid against their rival South Alabama on Saturday, the Trojans have a stiff challenge ahead of them this Saturday when they take on Coastal Carolina at Veterans Memorial Stadium.

The Trojan defense shutout the Jaguars and quarterback Gunnar Watson threw for three touchdowns and threw for nearly 300 yards in Troy’s 29-0 win.

“Saturday was a big win for us, and I was really proud of our team and how we played as unit,” head coach Chip Lindsey said during his Tuesday press conference. “All three phases of the ball really complimented each other. We had a great week of practice last week, which is really where it started. Our practices were spirited and physical and it seemed like it paid off on Saturday.”

This week the Trojans return home for the first time since their loss to Middle Tennessee State in late November. They will be taking on a Chanticleer team that is the talk of the nation after their win over BYU last Saturday. The Chanticleer’s enter the week with a perfect 10-0 record.

Following their win, Coastal Carolina moved up to no. 11 in the latest AP Rankings, making them the highest ranked team to visit Veterans Memorial Stadium.

“It’s an opportunity against a good opponent, who is having a special year,” Lindsey said. “Our goal, obviously, is to play really good football and try to get a win at home. That is what our minds are focused on this week.”

“They were very impressive in that game. We’ve seen BYU up close and personal, but I thought Coastal had great momentum going into that game which helped,” Lindsey said. “They’ve had a lot of really good things happen for them this season. When you play good football, you put yourself in position to build momentum. BYU is a really good football team and it probably hurt them some having to come across the country last minute, but you can’t take anything away from Coastal. They had a great plan, executed that plan and won the game. I was very impressed with them as I have been all year.”

After having many players forced to miss the last few games due to COVID-19, The Trojans went into last Saturday largely healthy for the first time in nearly three weeks.

“We were in a situation the last couple of weeks where we didn’t have enough players to run scout team which is a problem,” Lindsey said. “You try and limit the amount of snaps your starters play against each other due to injury concerns, but last week we were able to get back to our normal practice routine. Hopefully it can help us play well again this week against a really good opponent.”

Saturday’s game will kickoff beginning at 2 p.m. and it can be seen on ESPN+.