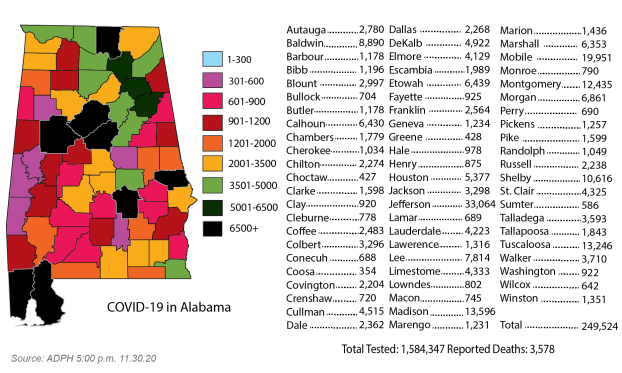 State hospitalizations ‘out of control’

MONTGOMERY, Ala. (AP) — Alabama on Monday reached a new high for the number of people in state hospitals with COVID-19, a record that comes before an expected spike in cases in the weeks following Thanksgiving gatherings.

Alabama Department of Public Health numbers  indicated that 1,717 people were hospitalized with COVID-19 in the state, the highest number reported since the coronavirus pandemic began. The previous high was a little over 1,600 in mid-summer.

“The spread is out of control. That is probably the least inflammatory way I can describe it,” said Dr. Don Williamson, the former state health officer who now heads the Alabama Hospital Association. “I try not to engage hyperbole, but I’m truly worried,” he added.

Williamson said the state is seeing more COVID-19 cases, hospitalizations and patients in intensive care units than in July, which previously had been considered the peak of the pandemic.

“The problem is none of this is due to Thanksgiving,” Williamson noted. He said it will take several more days to start seeing the impact of Thanksgiving gatherings on cases and hospitalizations.

Williamson has said a significant concern for hospitals is the number of nurses and other medical employees who are out because they have gotten COVID-19 or have been exposed to the virus.

“It is too soon to see any surge yet from Thanksgiving activities,” Harris said.

“As we all know, the vaccine development process is ongoing, but based off of these continued discussions, Gov. Ivey is hopeful that the vaccine will begin circulating later this month,” spokeswoman Gina Maiola said.

Maiola said the Republican governor “reminds Alabamians to stay vigilant as we near the beginning phases of the vaccine distribution.”