Lindsey eager to return to the Trojan sideline 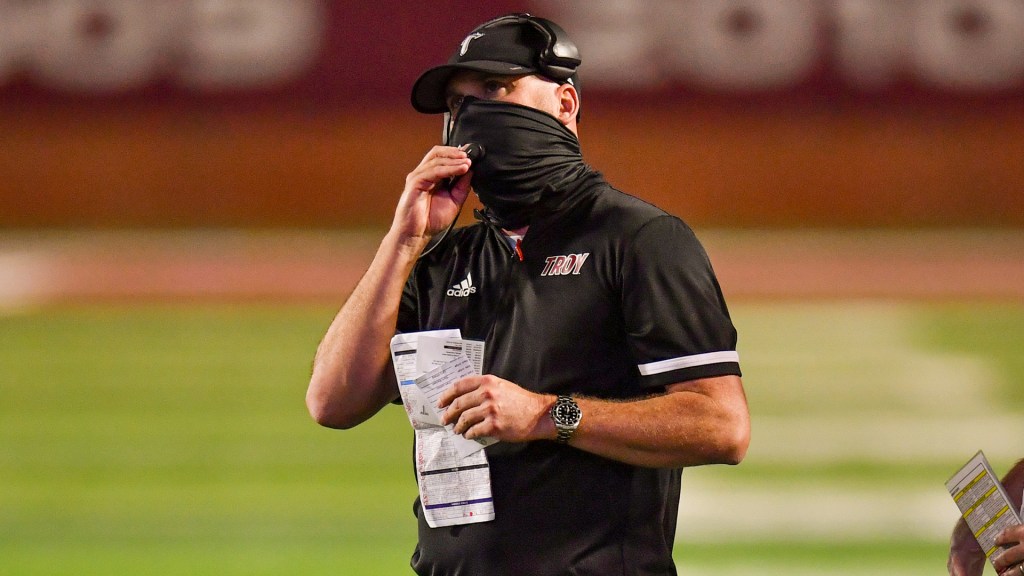 Troy head coach Chip Lindsey missed Saturday’s game against Middle Tennessee State after he tested positive for COVID-19 last Wednesday. If all goes well this week, Lindsey expects to be back on the sideline against Appalachian State.

Brian Blackmon filled in for Lindsey, who watched the game on TV from the comfort of his home.

“It was a very unusual experience for me,” Lindsey said. “To sit at home and watch your own team play is gut wrenching to be honest with you. It’s the hand we were dealt when we decided to play this year. It’s something we had to plan for and we did.”

Lindsey wasn’t alone when it came to missing Saturday’s game. In all, the Trojans had three full time coaches miss the game as well as all the offensive graduate assistants. 10 players missed the game due to COVID-19 or injury.

“I thought the guys (staff) tried to execute,” Lindsey said. “I think total we had three fulltime coaches, all of our offensive Graduate assistants, going into the game 16 players, I think six of them got released the day of the game, which means they didn’t practice for the last 10 days. We were definitely playing at less than full strength for sure.”

Lindsey started experiencing mild symptoms on Tuesday. After testing on Wednesday, Lindsey learned he would not be coaching his team’s game on Thursday.

“My symptoms were really mild,” Lindsey said. “Just felt a little fatigued and maybe a little bit of a head cold. I have lost some taste and smells, but not as bad as I have read, so I’m fortunate from that standpoint. I had to watch it from a fan’s standpoint and it was really hard to be honest. I know there are several coaches across the country that had to deal with it as well. 2020 is unlike any other year we have been through. Hopefully all that is behind us and we can move forward.”

When the Sun Belt Conference decided to play back in the summer, Troy immediately set up a plan in case Lindsey ever tested positive and couldn’t coach. The plan in the summer was to allow assistant head coach John Carr to fill in. On  Saturday, Carr was unavailable to coach because he too tested positive last week.

“Brian was going to be the next guy if John was out,” Lindsey said. “John was out, so we stayed with our plan.  Cole Weeks called the plays for us. This is his sixth year with me in some capacity. It came very natural for him because he is on the headset with me when I’m calling plays.

“Brian I thought did a nice job. I had no qualms with anything he did. He was trying to win the game just like any of us. He has been a head coach for close to 20 years in high school. He was very comfortable getting in front of the team. I thought he managed the game fine on Saturday.”

The Trojans were also without defensive line coach Davern Williams.

Although he wasn’t physically with the team late last week and won’t be again for much of this week, Lindsey is still comunicating with the team.

“I think our players and coaching staff are doing a great job of trying to keep things on as normal of a routine as possible,” Lindsey said.

Lindsey is expected to be cleared to rejoin the team sometime on Friday. He is eager to be with the team against the Mountaineers on Saturday.

“I do feel like we will be closer to full strength,” Lindsey said. “I think I come out of quarantine on Friday. I plan on getting up to North Carolina and getting prepared.”

Trojans looking for ways to win the close games