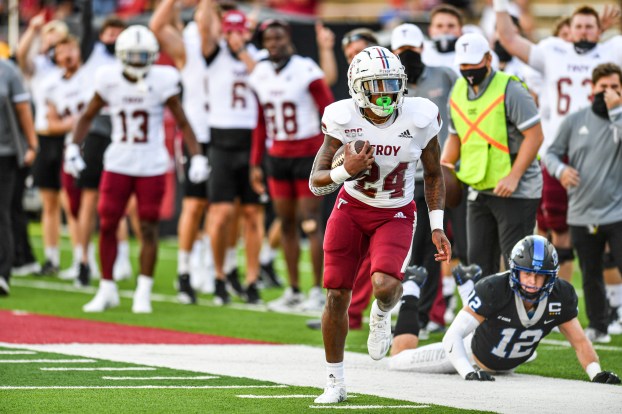 Photo/Troy Athletics Jamontez Woods runs the football for the Trojans.

Trojans looking for ways to win the close games

Troy’s third consecutive loss by seven points or less on Saturday leaves them searching for ways to win the close games.

The Trojans fell to Middle Tennessee State on Saturday 20-17 at Veterans Memorial Stadium.

“Very frustrated. Very emotional locker room right now,” interim head coach Brian Blackmon said on Saturday. “I thought we made too many mistakes. I think at halftime we had four penalties and a turnover and they had none in either category. I thought that was a major factor in the first half. Really proud of the effort our guys displayed, but obviously not happy with the outcome,”

“It’s three losses where we were right there until the end of the game,” interim head coach Brian Blackmon said. “You look at the Georgia State game and then tonight. We were an onside kick attempt away from getting the ball and getting a chance to go down and kick a field goal.

“The margin of error in this league is so small,” Blackmon continued. “The teams in this league are really good. If you look across our conference there is a lot of comparable teams. You can’t afford to make mistakes and win in our league. The frustration in the losses is the fact that we were in those ball games and your just not able to finish.”

Watson, who made his return to the lineup after missing the last two games, believes the small mistakes have made the difference in the team’s close losses this season. Late in the third quarter on Saturday the Trojans were in the red zone with a chance to tie the game or pull to within four. A Watson interception ended the drive.

The Trojans returned to practice on Sunday. Defensive lineman Will Choloh and his teammates are searching for ways to finish off the close games.

“We just hope this week that we can find it,” Choloh said. “We are about to play another good ball team that we can definitely compete with. We know that once we fix what we need to do there aren’t a lot of teams that can play with us. We just have to figure that out.”

Running back B.J. Smith believes the team needs to focus more on the little things that begin well before Saturday’s game.

Lindsey tests positive for COVID-19, Blackmon steps in against MTSU

The Trojans return to Veterans Memorial Stadium on Saturday to take on Middle Tennessee State, but they will be doing... read more