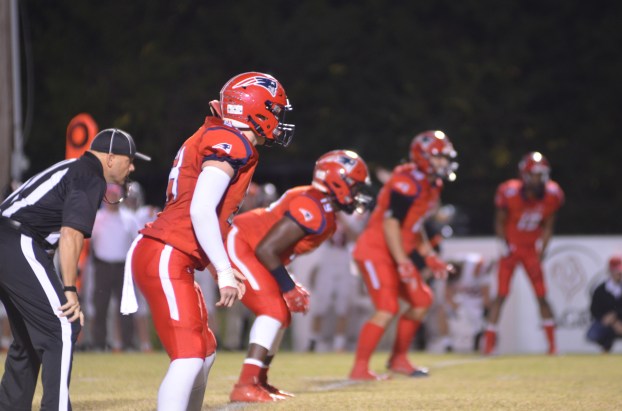 Patriots score early and often in win over Monroe Academy

The Pike Liberal Arts Patriots scored 35 first half points on their way to a 45-7 win over Monroe Academy in the first round of the AISA State Playoffs on Friday night.

The win for the Patriots puts them in state semifinals for the first time since the 2010 season.

The Patriots scored on five of their seven first half possessions and their defense added another one.

The Patriots scored the game’s first points on the third play of the game when Mayes White scampered for a 48-yard touchdown with 11:05 remaining.

Following a Mario Davenport interception, the Patriots doubled their lead to 14-0 when Javon Christian hauled in a 21-yard touchdown pass by White with 6:18 remaining in the quarter.

Jay Taylor hauled in a touchdown late in the first quarter when he caught a White pass from 16 yards out.

Leading 21-0 early in the second quarter, senior kicker Scott Taylor Renfro made a 32-yard field goal, putting the Patriots up 24-0.

White had two rushing touchdowns in the first half on Friday night. The second one came on a 44-yard run, putting the Patriots up 32-0 with 9:28 remaining the half.

Pinned deep inside their own territory, the Volunteers botched a snap that went rolling into the end zone. The Patriots scooped up the football for a touchdown.

Trailing 38-0, Monroe Academy used a littler trickery to get on the board. After hauling in a pass a Monroe receiver threw a pass of his own 54 yards for a touchdown. After a successful extra point, the Patriots lead was cut to 31 at 38-7 late in the first half.

The Patriots scored the final touchdown of the contest when White connected with Christian for a second touchdown.

The Patriot offense put up 402 yards of offense in the win. White completed nine of 13 pass attempts for 187 yards and had three touchdowns. He led the Patriot ground attack as well. He rushed for 104 yards on only five carries.

The Patriots will travel to Bessemer to take on the Rebels in the second round next Friday night. The two teams met in Bessemer in an exhibition game late this summer with the Rebels coming away the win. Kickoff is set for 7 p.m.

“We have a huge test in front of us,” head coach Mario White said. “We’ll take Saturday off and we will come in Sunday after church and watch a little film. We are going to be real honest with ourselves. We have a huge test on the road.