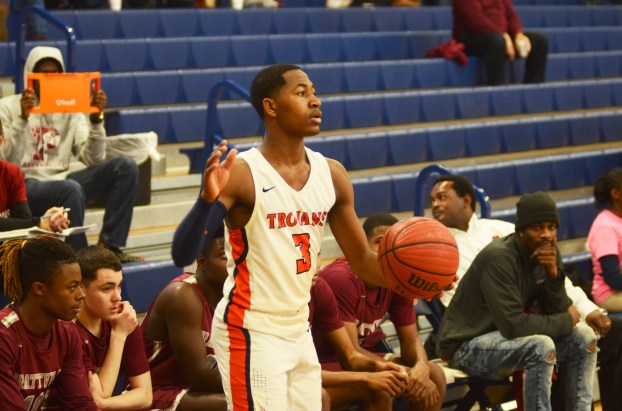 photo/Mike Hensley | The Messenger Akeives Shorts looks to inbound the basketball for the Trojans against Prattville last season.

The 2020-2021 high school basketball season is quickly approaching as the Charles Henderson Trojans get set to begin their season next Tuesday in Montgomery against the Montgomery Catholic Knights.

Like many teams across the state and the country, The Trojan basketball team has had to adjust to a different offseason and head coach Doug Branson admits it will be a season unlike any other. Despite the challenges, the Trojan players are eager to get back on the floor.

“Like everybody else across the country we are in the middle of a pandemic,” Branson said. “It’s day to day and minute to minute. Procedures and protocols have changed. Our guys are really excited to get back on the floor and they were excited to be together and that was nice.”

Branson believes, like it was in football, that there will be game cancellations and postponements this season that will provide challenges for all teams.

“It’s going to be a challenging year, but also an exciting year,” Branson said.

The Trojans are brining back an experienced roster this season. The Trojans will return five players from last season’s top rotation.

“We are hoping they can take another step forward and we can be a solid basketball team,” Branson said. “I feel like with who we have coming up from junior varsity and with who we have returning, we have some really nice pieces that should allow us to be pretty competitive this year.”

The Trojans finished last season with an 18-13 record and they advanced into the postseason. With an experienced roster that is still young, Branson believes the one year of varsity experience that many of his players received last year will be beneficial this season.

“In their one year of playing varsity basketball they learned the speed and the intensity of the game,” Branson said. “On Monday, Tuesday and Thursday they practiced to get ready for a game on Friday. They know the level of intensity it takes to compete and be successful.”

The Trojans enter the season with plenty of size on their roster. Last season they struggled shooting the ball. This season, Branson believes his team will be better at shooting while being good on the defensive end of the floor.

The Trojans will make up a three-team area this season along with Greenville and Andalusia.

“Greenville is always talented. They won our area last year,” Branson said. “ I expect Greenville to be very competitive and make it challenging at their place and of course here at our place. Andalusia moved up to 5A. Coach Goldberg is a good coach and has a great basketball mind. Like a lot of teams Andalusia is usually two or three rounds into the state football playoffs and coach Goldberg doesn’t get his full team until later on. They are an improving squad as the year moves on.”

After playing Montgomery Catholic on Tuesday, the Trojans remain on the road against Carroll, Talladega and Highland Home before coming home to host Enterprise in their home opener on November 20.