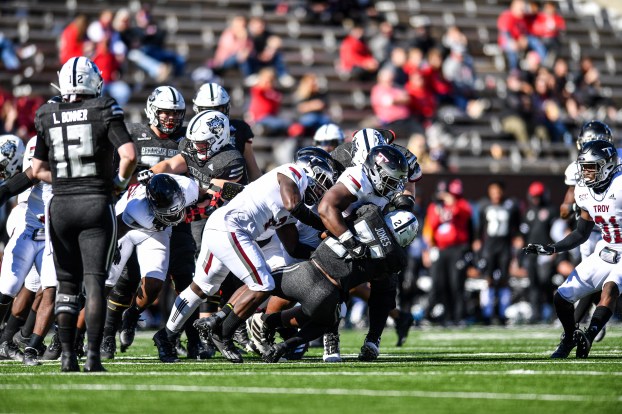 SBC enjoying national audiences and strong start to the season

The Sun Belt Conference is enjoying national audiences and a strong start to the 2020 season.

The Sun Belt conference enters week 10 having already had two different teams ranked in AP Top-25 Poll. Louisiana climbed to as high as 19 in the polls and currently Coastal Carolina sits at No. 15, the highest ranking of any Sun Belt School.

“I’m very impressed with this league,” Troy head coach Chip Lindsey said. “It’s the top G5 league in my opinion. The thing you see is really good coaches who do a good job in recruiting. I think you see a commitment by the universities in this conference to provide facilities and resources and things like that to make it better than it was before.”

Lindsey is no stranger to the Sun Belt Conference. His first stop in Troy came in 2010 as the quarterback coach. The conference looked a lot different at that time. Teams like North Texas, Florida Atlantic and Florida International are no longer in the conference. With teams like Appalachian State and Coastal Carolina joining the mix, the bar has been raised according to Lindsey.

“It was a different league,” Lindsey said. “The level has been raised in our conference. Anybody can beat anybody. There are a lot of good teams in this league.”

With the Big 10 and PAC 12 Conferences starting late this season, SBC teams were featured on a national stage. Instead of playing on streaming platforms including ESPN3 and ESPN+, many Sun Belt Teams have had the opportunity to play on ESPN, ESPN2 and ESPNU.

“I think that’s big,” Lindsey said. “I think it’s always good to get that exposure. When we get on national TV it’s an opportunity for us to showcase our university and not just football, but our academic opportunities. We have taken full advantage of it and I think you see it around the league. I think people are getting their eyes opened to what a good football league this is.”

The Sun Belt Conference has had plenty of bowl success recently. The have the best winning percentage in bowl games among all ten FBS conferences.  The Sun Belt will have five bowl-tie-ins beginning in 2020

The Troy Trojans avoided their first two-game losing streak of the season on Saturday when they knocked off Arkansas State,... read more