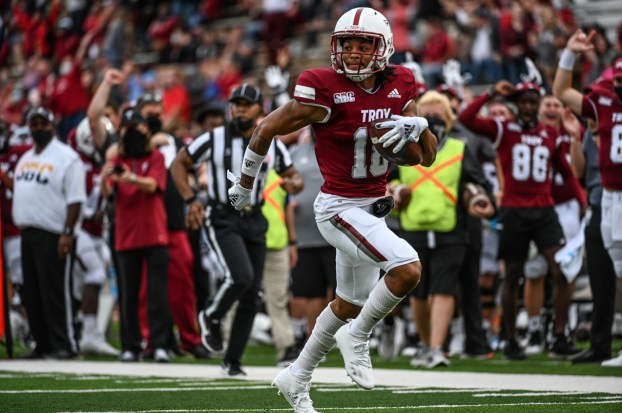 “With the exception of one drive in the third quarter (on Saturday), I think we did an excellent job. Coach (Brandon) Hall and his staff are doing an excellent job putting together a great plan and giving us opportunities. Our defense played extremely hard last year. We were challenged physically and didn’t respond like we wanted. That was a point of emphasis this year, and I think they have responded well to it.”

The Trojan defense forced three turnovers on Saturday, both resulted in touchdowns. Reddy Steward intercepted a pass off a deflection and returned it for a score. On the next possession defensive lineman Will Choloh forced a fumble that was returned for a touchdown by fellow lineman Shakel Brown.

“I got a lot of phone calls and pictures of the touchdown,” Brown said. “It’s still amazing. I didn’t expect it to happen, but thanks to Choloh it fell right into my hands. It still feels new, but it’s starting to set in.”

It was the first time since 2015 that the Trojans had two defensive touchdowns in one game and just the fourth time in their FBS history.

The Trojans, through five games have five interceptions, which is tied for second most in the Sun Belt Conference. The defense has also recovered five fumbles.

“We talk every week about running to the football,” Brown said. “Even if you think guys are going down, you never know what could happen. Getting to the football is the main focus of our defense. We don’t want just one guy, we want all 11 guys on defense to swarm to the ball every single time.”

“Offensively, they are very explosive,” Lindsey said. “They have an outstanding receiving corp. Both quarterbacks are really good players. Anderson is committed to playing them both and rotating them, which is very impressive. They do a good job at attacking you in different ways and they are very creative. It will be a big challenge for our defense. Arkansas State has put up a lot of points this year.”

‘We have to play better’: Trojans regrouping after tough loss