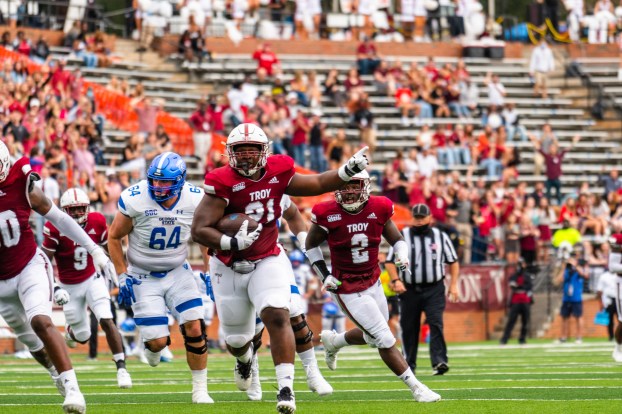 ‘We have to play better’: Trojans regrouping after tough loss

Troy head coach Chip Lindsey met with the media on Tuesday morning to discuss his team’s loss to Georgia State and what they are doing to get ready for their game on Saturday against Arkansas State.

The Trojans dropped to 3-2 with the loss to Georgia State.

Before each game, Lindsey and the team sets five goals they would like to achieve each game. Those goals include creating 10 or more explosive plays, five or less loss yardage plays, be 50 percent on third downs, be 100 percent in the red zone and have one or less turnovers. On Saturday, Lindsey believes his team fell short in reaching those goals.

“Tough loss on Saturday,” Lindsey said. “Too many critical errors. We didn’t get to our goals this week. We played good in spurts offensively, but the turnovers were a huge part (of the loss). That was the story of the game.”

The Trojans had to turn to backup quarterback Jacob Free for the final three quarters on Saturday after starting quarterback Gunnar Watson was forced to leave the game after sustaining an injury. After completing five of his first eight passes for over 100 yards, Free finished the day 24 for 38 for 329 yards and two touchdowns. He also finished with two interceptions and a fumble.

“He came in and gave our team some what of a lift,” Lindsey said. “He handled it very well for a guy with limited reps. Obviously there were two or three throws that he would like to have back, but I think he has a lot of talent.”

Watson was listed as the starter when the team released the depth chart for Saturday’s game, but Lindsey admitted he will know more about his quarterback’s status on Wednesday.

“We are going to try in the middle of the week, maybe tomorrow, to have some kind of update,” Lindsey said “Obviously he his banged up and is sore. We have to see how he responds. I know it’s nothing serious, but we’ll see if he can play. Gunnar is one of the toughest guys on the team, so if it’s possible to play then he will.”

Despite allowing 36 points, Lindsey liked what he saw out of his defense on Saturday. The defense had two touchdowns, including an interception return by Reddy Stewart and a fumble return by Shakel Brown. Freshman Jayden McDonald, in his first start, finished with team high 16 tackles.

“Jayden McDonald and Reddy Stewart were big bright spots this week on defense,” Lindsey said. “Jayden had 16 tackles and Reddy had the interception. Shakel Brown also had a fumble return for a touchdown. Really excited to see those guys. Those are newer players that we have who are playing a lot and making plays. Excited about the growth of the defense.”

“We felt like we had an opportunity on Saturday to win a conference game at home and that is something we talk a lot about,” Lindsey said. “At the end of the day we aren’t playing good enough right now to get that done. It shows up when you play good opponents. We have to get it corrected because we play a good one this week.

“I really think this team is close to playing to our potential. At the end of the day we have to play better.”

“Big challenge for us being on the road in a conference game against a really good team,” Lindsey said. “It should be a really good game; probably very similar to what we had this past weekend.”

Hall of Fame “Voice of the Trojans” Ralph Black painted a picture of some of the most historic moments in... read more