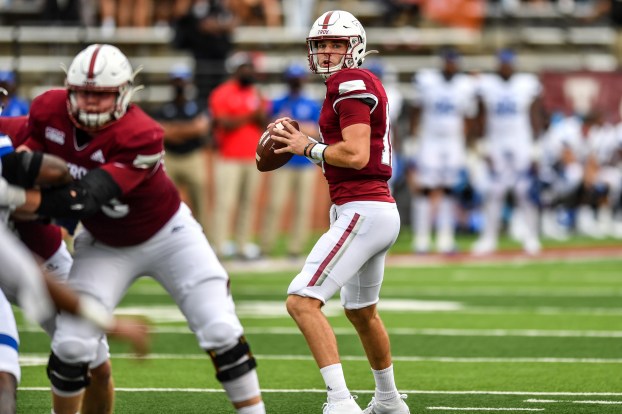 Trojan quarterback Gunnar Watson completed a touchdown pass to Khalil McClain in the first quarter of Troy’s game against Georgia State on Saturday. It was the last play of the day for the young quarterback as he sustained an upper-body injury that sidelined him for the remainder of the contest.

Free played the remaining three quarters in Troy’s eventual 36-34 loss to the Panthers at Veterans Memorial Stadium. Free saw mixed results in his outing on Saturday. The junior completed 24 of his 38 passes for 329. He threw two touchdown passes, but also had two interceptions.

“I made a few critical mistakes that outweighs every good thing that I did,” Free said. “I have played football long enough to know those mistakes are not acceptable, especially in a close game. My offensive line played great and the running backs played great. I have to clean up my mental and physical mistakes.”

The Trojans were trailing the Panthers 7-0 late in the first quarter when Watson through his touchdown pass to McClain. The quarterback stayed on the turf and then after getting up he went straight into the medical tent. After walking up and down the sideline for a few minutes, Watson went back inside the tent for more observation. Before running onto the field, Free made his way into the tent to check on his teammate and best friend.

“I checked to see how he was doing,” Free said. “He is my roommate and my best friend. He gave me some words of encouragement and told me what he saw. He told me to go get it.”

Free pushed back any nerves he was feeling and had good start to the game, completing five of his first eight passes for 104 yards.

“I had a few butterflies, but I train every week just like the starting back trains,” Free said. “Being the backup quarterback, any second my number can be called. I knew what had to be done and I knew my teammates believed in me. I was ready to let it role.”

The Trojans were outscored 24-7 in the second half. The Trojans turned the ball over three times in the second, two of which came by way of an interception. Despite a few mistakes, head coach Chip Lindsey believes there is plenty of evidence that shows Free being a solid quarterback.

“Free came in and did a tremendous job,” Lindsey said. “He played for the first time and it was a good performance. I was impressed with how he ran the offense. He had a few passes that he would want back but you can see he is a talented guy.”

Free led the Trojans to a last minute touchdown to pull to within two points. The Trojans lined up for what they hoped would be a game-tying two-point conversion, but Free’s pass sailed beyond his McClain’s reach.

“We ran a roll out to the right and I knew I had to give somebody a chance,” Free said. “Nobody was open so I was going to give it to one of my bigger guys on the outside. It just didn’t happen. I threw it too far and didn’t give him a chance. I have to give my guy a chance in that situation.”

The failed attempt set up an onside kick for the Trojans. After Reggie Todd corralled the football, instant replay declared that he touched the ball before it went 10 yards, giving possession back to Georgia State.

“It looked to me like he had the ball (beyond 10 yards), but that’s not our decision,” Free said. “We have to take it for what it is and bounce back next week. This game is over and we have a long road ahead of us. We have to look forward and not back.”

Following the game on Saturday, Lindsey said it was too early for him to comment on whether it will be Free of Watson at quarterback this Saturday against Arkansas State.

On Sunday afternoon, a gathering of Monticello area residents and those with keen interest in local history witnessed the posting... read more