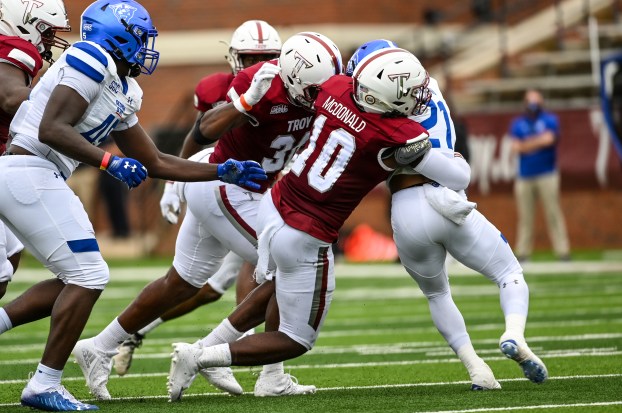 The Georgia State Panthers put a damper on Troy’s homecoming festivities when they knocked off the Trojans 36-34 on Saturday afternoon.

With Troy Trailing 36-28, Reggie Todd hauled in an 11-yard pass with 37 seconds remaining to bring the Trojans to within two. A failed two-point conversion attempt forced Troy to kick an onside kick. Receiver Reggie Todd looked to have recovered the kick but after review it was decided that he touched the ball before it went 10 yards, ending Troy’s chances for a comeback win.

“Obviously hurting for our team,” head coach Chip Lindsey said. “We have a locker room full of guys that are hurting. Proud of our team and proud of how they fought. We are a work in progress but I like the direction our team is heading. We have a lot of things to build on. Very disappointed, but I still love the team and the guys.”

Lindsey was confident that his team covered the onside kick even after the officials decided to go to replay.

“I thought we got it,” Lindsey said. “They ruled it our ball on the field. I knew it would have taken a lot to overturn that call. I have to believe there was a lot for it to be overturned. It’s part of it. Probably never should have been in that situation.”

After holding a lead in the first half, the Trojans were outscored in the second half 23-7.

The loss for the Trojans snaps a three-game winning streak and brings their record on the season to 3-2.

The Trojans turned the ball over four times on Saturday, three of which came in the second half.

The Trojans lost quarterback Gunnar Watson early in the second quarter due to injury, giving way to backup quarterback Jacob Free. Watson finished the game 8-10 for 78 yards and he had a touchdown pass.

Free finished the game completing 24 of his 38 passes for 329 yards. He had two touchdowns and two interceptions.

“Free came in and did a tremendous job,” Lindsey said. “He Played for the first time and it was a good performance. I was Impressed with how he ran the offense. He had a few passes that he would want back but you can see he is talented guy.”

The two offenses combined for 34 points and 399 first half yards.

The Panthers scored the game’s first touchdown when they took the opening drive 75 yards on 11 plays ending with a Roger Carter four-yard touchdown catch.

The Trojans evened the score on their third drive of the game. Watson connected with Khalil McClain on a 10-yard touchdown pass. At the tail end of the play, Watson was hit hard and was forced to leave the game due to an upper-body injury.

Free entered the game and completed five of his first eight passes for 104 yards.

The Trojan defense had two touchdowns in the first half and they came on back-to-back possessions. trailing 10-7, Reddy Steward picked off a Cornelius Brown pass and returned it for a 35-yard touchdown. On Georgia State’s next possession Will Choloh hit Brown and forced a fumble that Shakel Brown caught out of the air and returned it 21 yards, giving Troy a 21-10 lead. It was the first time since 2015 that the Trojans had two defensive touchdowns in a game and just the fourth time in their FBS history.

The Panthers closed out the first half with a Noel Ruiz 31-yard field goal, cutting Troy’s lead to eight at 21-13.

In Troy’s opening drive of the second half, Free and the Trojans got inside the Panther 10 yardline, but a Free interception off a deflection ended the threat.

The Panthers took advantage of their extra possession. Facing a fourth and two on the Trojan 27, Tucker Gregg took a handoff and raced his way for a 27-yard touchdown. After an offensive pass interference wiped away a successful two-point conversion, the Panthers were successful on an extra point attempt, bringing the score to 21-20 Troy with 9:02 remaining in the third.

After a Troy three-and-out, Georgia State retook the lead when Brown found a wide open Carter who scampered his way in for a 36-yard touchdown. After a blocked extra point, the Panthers held a 26-21 lead with 6:05 remaining in the third.

The Trojans committed their third turnover of the game when Watson was stripped sacked, giving Panthers possession on Trojan eight yardline. After a pass interference call put Georgia State on the two yardline, Brown dove his way in for two-yard score and the Panthers took a 33-21 lead with 4:24 remaining in the third.

The Troy offense finished with 89 yards in the third quarter and committed two turnovers.

Free and the Trojan offense broke their scoreless streak when Free connected with AJ Lewis for a two-yard touchdown pass bringing the score to 33-28 with 13:29 remaining in the contest. McClain had a 35-yard completion to set the Trojans up in the redzone.

Todd finished the game with eight catches for 130 yards and he had one touchdown. Kaylon Geiger finished with five catches for 88 yards.

The Trojans will be back in action next week when they travel to Jonesboro to take on Arkansas State.

Students shine in ‘art the size of a dollar bill’ exhibit