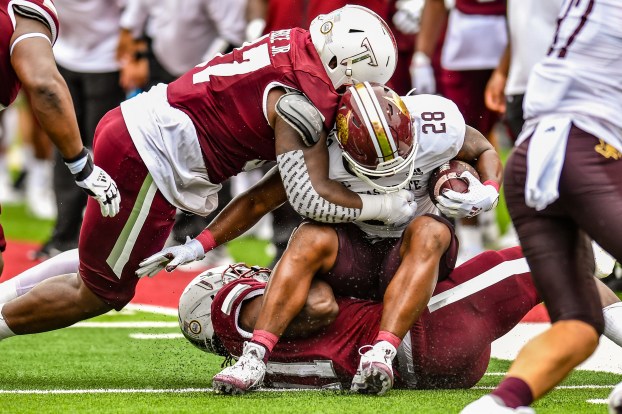 Troy defense plays with an edge in win over Texas State

The Troy Trojan defense entered Saturday’s game against Texas State with something to prove. They made their statement in a 37-17 win over the Bobcats at Veterans Memorial Stadium.

In Troy’s prior game against BYU in late September the Trojans surrendered 48 points and 664 yards of total offense. They bounced back on Saturday, holding the Bobcats to 17 points and 254 yards of offense.

Big plays really hurt the Trojans in their loss to BYU. They allowed a 70-yard touchdown pass and BYU had seven plays go for at least 20 yards. On Saturday the Troy defense allowed just two plays of at least 20 yards.

“Really pleased with how we played in two of the three games we have played in,” head coach Chip Lindsey said. “Our defense has done a really nice job at limiting the number of big plays. That’s the key to playing good defense with all the good offenses out there. That is one thing our defense focused on in the offseason.”

The Trojans had four players finish with at leas five tackles led by senior Carlton Martial who had seven tackles. Jayden McDonald finished with six while Will Choloh and KJ Robertson each had five.

The Trojans went into the game wanting to turn the page from their performance against the Cougars.

“We knew we had to step up and redeem ourselves from two weeks ago,” Martial said. “We had to get the bad taste out of our mouth. It felt good to get the win. We had good communication, Coach Brandon Hall had a good scheme, so hats off to him. Everybody was on the same page.”

The defense was a weak spot for the Trojans last season, finishing eighth in the Sun Belt Conference in scoring defense and last in passing yards allowed. This season the defense is holding themselves to a higher standard.

“They didn’t play a good brand of defense last year,” Lindsey said. “Coach Hall and our players want to play to a certain standard and that is something that is definitely in their mind all the time. Really pleased with the progress we are making so far. There is obviously more there to clean up. I just think they are trying to hold themselves to a high standard and really get themselves in a position to make an offense earn it.”

In three games this season the Trojans rank fifth in scoring defense, fifth in passing defense, fourth in rushing defense and third in total defense.

The Trojan defense will get back to work this week to prepare for FCS opponent Eastern Kentucky.

Bowden: ‘This is the most humbling experience’: Huntingdon College honors her for ‘dedication’

The voice on the telephone was familiar. Anthony Leigh is the senior Vice President for alumni relations at Huntingdon College,... read more