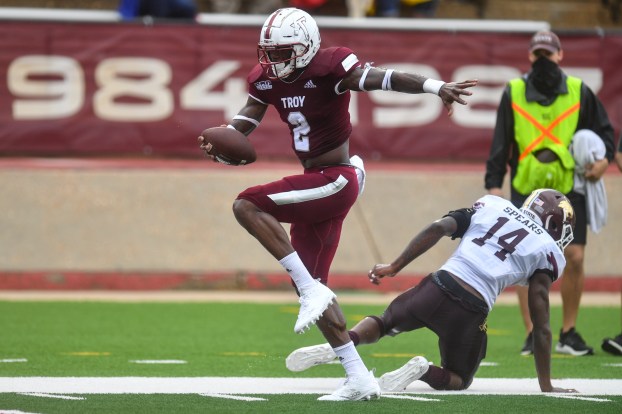 After a quiet performance in Troy’s loss to BYU earlier this month, the Trojan receivers picked up the pace in Saturday’s game against Texas State.

The Trojans knocked off the Bobcats 37-17 on Saturday while putting up 488 yards of total offense. In doing so, Troy had 10 different receivers catch a pass and three different players score a receiving touchdown. The Trojan offense finished the game with 338 passing yards.

“We have a good unit and we play a lot of guys,” Troy head coach Chip Lindsey said. “It’s what we do on offense. In our offense, we are trying to make them defend the length and the width of the field. By doing that, I think everyone touches the ball.”

Both of Todd’s touchdowns came in the first half on Saturday. The first touchdown came after he spun off a Texas State defender and refused to be tackled by just one player.

“I always have a goal of not having just one person bring me down,” Todd said. “Just keep competing. I always have that mindset.”

Geiger, who helped set up that touchdown by hauling in a 44-yard pass three plays earlier, has come to expect that out of his teammate.

In Troy’s previous game against BYU, the offense failed to get 200 yards of total offense for the first time sine 2014. The offense finished with 162 yards. Troy’s leading receiver in that game was Tray Eafford, who caught two passes for 59 yards. On Saturday, five different players caught at least three passes.

“It was the confidence,” Geiger said. “We had more juice this time around. We were prepared and we were ready to play. We matched their energy.”

Geiger and Todd were not the only Troy receivers to score a touchdown in the win. Eafford also got on the stat sheet on Saturday with three catches for 33 yards. He had scored a touchdown after hauling in a pass while tiptoeing the sideline. Eafford later had to leave the game after sustaining what look like to be a lower body injury.

“I don’t think it’s extremely bad,” Lindsey said after the game. “Hopefully it’s some kind of sprain, but I haven’t heard yet.”

What the receivers, specifically Todd and Geiger, were able to do on Saturday did not come as a surprise to quarterback Gunnar Watson.

“It’s nothing new. They do it all the time in practice,” Watson said. “This was really the first time they got a lot of action in a game. Any one of them can play. If you can get them the ball they are going to score.”

Bret Clark and Khalil McClain both finished with four catches for 26 yards.

The Troy Trojans had 23 unanswered points in their 37-17 win over the Texas State Bobcats in the home opener... read more