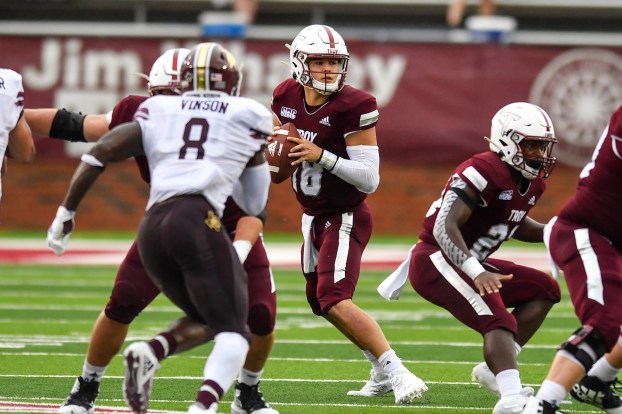 Quarterback  Gunnar Watson went into Saturday’s contest looking to improve after Troy’s loss to BYU earlier this month. By day’s end, Watson helped lead the Trojans to a 37-17 win over Texas State and in doing so was named the Sun Belt Conference Player of the Week.

Watson finished the contest completing 33 of his 46 passes for 338 yards and he had career-high four touchdown passes. He eclipsed the 300-yard mark for the first time in his career.

“I thought he was really poised back there,” said head coach Chip Lindsey. “He really made good decisions and he threw the ball with good trajectory. I thought he showed a lot of poise and confidence. I thought the longer the game went he got more confident.”

In Troy’s loss to BYU earlier this month pressure got to Watson. Watson was sacked a total of four times and hurried three times. Against Texas State Watson had more time to move around the pocket and was not sacked. Because of that Watson believes he was more comfortable.

“The more I play the more comfortable I get,” Watson said. “I thought our offensive line did a heck of a job of protecting. They brought a little pressure, but I felt like I had plenty of time today to sit back there and go through my progressions.”

Watson had more time preparing for this game due to the postponement of Troy’s game against South Alabama. He made good use of the extra time.

“It helped me prepare a lot,” Watson said. “I got in the film room a lot more last week and I think everybody was ready.”

Despite the strong performance, Watson has already turned the page and is looking forward to his next contest against Eastern Kentucky.

“It was big, but we have to put that one to bed and get on to the next one,” Watson said. “It’s get to get a win, but I’m looking forward to the next one and getting better this week during practice.”

After a quiet performance in Troy’s loss to BYU earlier this month, the Trojan receivers picked up the pace in... read more