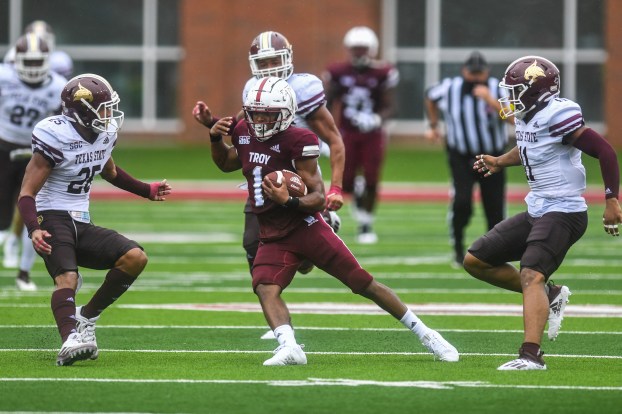 The Troy Trojans had 23 unanswered points in their 37-17 win over the Texas State Bobcats in the home opener on Saturday afternoon.

The win for the Trojans gives them a 2-1 record on the season.

“Always good to get a win,” head coach Chip Lindsey said. “It’s hard to get a win in college football. Excited about how our guys came out. Not getting to play last week, I thought we came out played extremely hard. Didn’t play clean in a lot of areas, but really pleased with the effort.”

“Obviously being 1-0 in the conference is a great start,” Lindsey said. “It’s a huge deal and we’re excited about that.”

The Trojans finished with just under 500 yards of total offense on Saturday, finishing with 488. Quarterback Gunnar Watson had his first ever 300-yard game and he threw for a career high four touchdowns.

“The more I play the more comfortable I get,” Watson said. “I thought the offensive line did a heck of a job. I thought I had a lot of time to sit back there and go through my progressions.”

After a quiet performance two weeks ago in their loss to BYU, the Troy receivers had a strong performance. Kaylon Geiger and Reggie Todd paced the Trojan offense by combining for 207 yards and three touchdowns. Geiger led the way with 121 yards on seven catches and had one touchdown. Todd finished with seven catches for 86 yards and had two touchdowns. The Trojans finished with 338 receiving yards.

“The first few weeks have shown what our receivers are capable of,” Lindsey said. “We have a good unit and we play a lot of guys. It’s what we do on offense. In our offense, we are trying to make them defend the length and the width of the field. By doing that, I think everyone touches the ball.”

After a slow start to their first half, the Troy Trojans finished with 260 total yards in the opening two quarters, while quarterback Gunnar Watson threw a career high three touchdown passes.

Kaylon Geiger and Reggie Todd both combined to score three touchdowns in the opening half and finished with a combined 195 yards. Todd had touchdown catches of 30 and 19 yards. In his first touchdown, Todd spun off Bobcat defenders on his way into the end zone.

“I always have a goal of not having just one person bring me down,” Todd said. “Just keep competing. I always have that mindset.”

Geiger hauled in a 38-yard touchdown pass. Geiger also had a career high 44-yard catch in the half that set up one of Todd’s touchdowns.

The Troy defense held the Bobcat offense to just 59 yards in the opening half and just 16 rushing yards. The Trojans went into the locker room at halftime leading 23-3.

The Bobcats finally got into the endzone in the third quarter when they converted a fourth and goal attempt from the four-yard line. Quarterback Brady McBride connected with Blake Aragon to cut Troy’s lead to 13 after the extra point at 23-10.

After John Hines recovered a Texas State fumble, Watson connected with Tray Eafford, who hauled in an 11-yard pass and tiptoed the sideline for the score. The Trojans went into the fourth quarter leading 30-10.

B.J. Smith scored his 18th career touchdown in the third quarter to move into ninth place on the all-time in Troy history.

Texas State scored one final touchdown in the final minutes of the contest.
Freshman Kimani Vidal finished with a game high 106 yards on 12 caries. Bret Clark and Khalil McClain each had four catches for 26 yards.

The Trojans will be back home next Saturday to take on Eastern Kentucky.