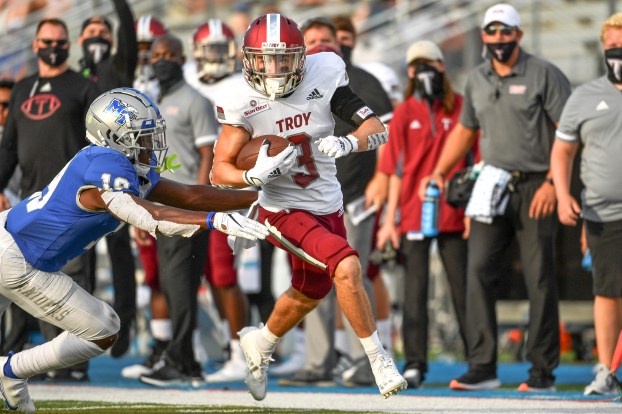 The Troy Trojans take on Texas State on Saturday in their 2020 home opener at Veterans Memorial Stadium.

It will be a day of first for the 2020 Trojans (1-1) on Saturday. Not only are hosting their home opener, but they will play their first conference game as well.

Although attendance will be limited on Saturday, head coach Chip Lindsey expects a fun environment.

“From what I can tell we’re going to max out whatever capacity we can have at The Vet on Saturday,” Lindsey said. “Our season ticket holders have done a nice job of keeping their tickets and supporting us. I know our students have been lined up all week at the ticket office to make sure they have their tickets because I’m sure with the limited capacity that there are restrictions on how many students can get in. We love playing here at home, and there’s nothing like The Vet on gameday. We have the best environment in the Sun Belt without a doubt, and I know the fans that do come on Saturday will be loud, and our players will feed off of that.”

The Trojans are coming off a 48-7 loss to BYU on Saturday will host a Texas State team that is 1-3 overall and 1-0 in conference play. Their conference in came at the expense of Louisiana-Monroe earlier this season. They fell to Boston College 24-21 last week.

“When you look at Texas State, they’re one of the most improved teams in the country when you compare where they are now to where they were when we played them last season,” Lindsey said. “Jake Spavital has done a really nice job of turning over their roster this season, and it seems like he’s taken over the play-calling duties, which makes sense because he’s always been a really good offensive coordinator.”

After allowing BYU’s offense to rack up 664 yards and 48 points, defensive coordinator Brandon Hall and the Trojans look to limit the big plays this Saturday.

“We looked back at the big plays,” Hall said. “We are going to see those same types of formations and plays throughout the year so we go back and look at all those big plays and see what we can learn.”

Texas State ranks third in the conference by scoring 32.8 points per game and fifth with 410 yards per game.

“When I look at their offense it starts with their quarterback Brady McBride who is a transfer from Memphis,” Lindsey said. “He’s the son of a high school coach which usually makes for a very competitive and tough football player. He’s a dual-threat guy who is a really good athlete. [Backup quarterback] Tyler Vitt is a really good player too, and I’ve seen him do some really nice things. Texas State has scored a lot of points this season, so we’re going to have to do a nice job of defending them. [Wide receiver] Jeremiah Haydel is another guy that stands out on the film.”

The Trojans failed to reach 200 yards of total offense for the first time since 2014. The Bobcats have allowed 30 points per game this season, good enough for sixth best in the conference. They have allowed 280 passing yards and 165 yards on the ground.

“Defensively it starts with their top corner, Jarron Morris, who is probably their most experienced guy on defense,” Lindsey said. “He leads their team in interceptions and break ups. He really shows up on film and makes a lot of plays for them. Overall, they have a lot of new faces on the defensive side of the ball. Their defensive coordinator is Zac Spavital and he does a great job for them. He mixes his looks up and does a great job of creating pressure. Again, it’s an area that Texas State has done a great job of improving this season.”

This will be the 10th all-time meeting between the two schools. Troy currently holds an 8-1 advantage and has won eight in a row including last year’s matchup 63-27.

The Town of Goshen has completed two major projects that were made possible by a $260,000 grant award from the... read more