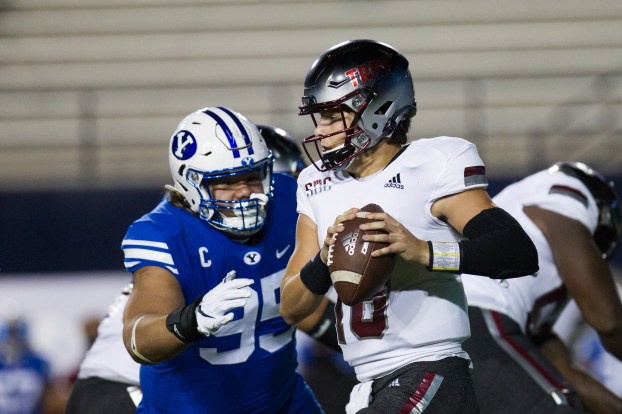 Watson uses time off to improve heading into home opener

Troy quarterback Gunnar Watson had as good of a debut as you could wish for in Troy’s season opener against Middle Tennessee earlier this season. His next performance wasn’t as strong in Troy’s loss to BYU. He looks to turn the page this Saturday against Texas State.

Watson was under more pressure against the Cougars compared to Middle Tennessee. Watson was sacked four times in the contest and was hit three other times.

“I could have handled it better for sure,” Watson said. “There were a few things like pocket presence that I could have done a lot better. I’ll improve on it and get better as the year goes along.”

There were at least two instances Watson was sacked after a member of the Cougar defense got through the line of scrimmage largely untouched. After a strong game in his first start against the Raiders, Lindsey admitted this time around Watson didn’t get much help around him. Lindsey believes Watson’s best days are still ahead of him.

“Coming out of the Middle Tennessee game I thought he did some good things in his first start,” Lindsey said. “I would have graded him pretty well the first week. Last week we didn’t protect him well and we didn’t play well around him. BYU, being who they are up front, we weren’t able to run the ball. I think Gunnar is improving each week. He needs to play; we’ve only played twice. It’s a really small sample size. I think his best days are ahead of him. He wants to be really good and that’s a really good quality to have as a quarterback.”

In just two games played, Watson ranks fifth in the conference in average passing yards per game with 205 yards.

Watson and the Troy offense will go up against a Texas State defense that is allowing 30 points per game this season along 446 yards of offense.