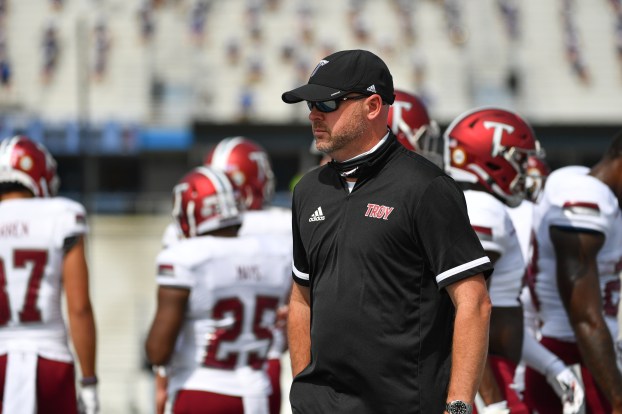 The Troy Trojans are one of two Sun Belt Conference teams yet to play a home game. They will get their first chance on Saturday when they host Texas State beginning at 2:30 p.m.

After last Saturday’s game against South Alabama was postponed due to the threat of COVID-19, the Trojans enter Saturday’s home opener with two games under their belt.

The Trojans last played a game inside Veterans Memorial Stadium on November 29 when they took on Appalachian State.

“Looking forward to playing here in the Vet,” head coach Chip Lindsey said. “That is what our players are most excited about. It feels like we haven’ played here in forever and here we are in October paying in the Vet.”

Veterans Memorial Stadium has seen a lot of Trojan success over the years. Since 2016 the Trojans are 18-6 while playing at home. They haven’t had a losing record at home since 2015 when they finished 2-3 at home.

Even though there will be less people in the stands thanks to social distancing guidelines, Lindsey and the Trojans expect the same great atmosphere when the team hits the field on Saturday.

“Whatever the capacity is, we are going to have that many people there,” Lindsey said. “We are excited. We love playing here at home. There is nothing like playing at the Vet. We have the best atmosphere in our conference without a doubt. Those guys that are going to be here on Saturday are going to be loud and our guys will feed off that.”

With last weeks postponement, the Trojans had an extra week to get ready their first home game. Lindsey and the Trojans used that time to clean up some mistakes from their first loss of the season.

“Last week we really focused on trying to improve some things from the BYU game,” Lindsey said. “It was a really good fundamental week. We introduced Texas State, but we had to do that quickly. Our time was well served working on Troy.”

This is not the first time the Trojans were forced to alter their plans for an opponent. They’re season opener against ULM was also pushed back to the end of the regular season.

“We’ve had to deal with that in the past so we just listen to coach Lindsey,” said defensive lineman Will Choloh. “He is the man with a plan.”

Choloh was part of the team that finished 3-3 at home a season ago. He is looking forward to playing in front of the hometown fans once again.

“It’s going to be great,” Choloh said. “It’s always great to play in front of the fans. We’re excited that people are going to be able to come to the game. We want to open up the home season the right way and handle business this weekend.”
Saturday’s game will be the first of three-straight home games for the Trojans. They will take on Eastern Kentucky on October 17 and Georgia State on October 24.

Kickoff between the Bobcats and the Trojans is scheduled for 2:30 p.m. and it can be seen on ESPN3.

At long last Veterans Memorial Stadium will play host to a college football game on Saturday when the Troy Trojans... read more