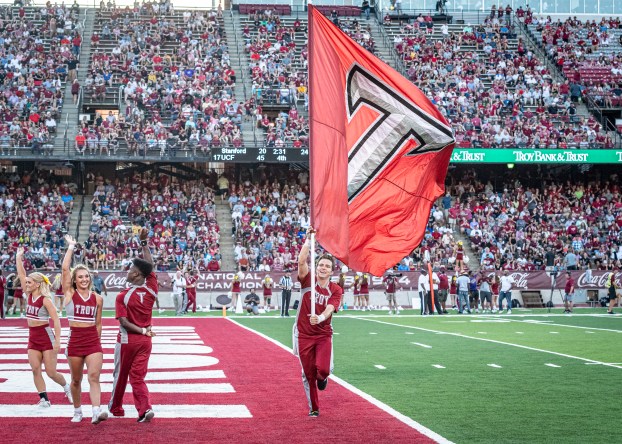 It’s been 11 months since the Troy Trojans hosted a football game. After numerous schedules, proposals and plans, Troy Director of Athletics Brent Jones and his staff will be able to enjoy a game at Veterans Memorial Stadium for the first time this season on Saturday.

The Trojans are one of the last Sun Belt Conference teams to play a home game. They will get their first opportunity against Texas State on Saturday.

“We are really excited to be able to have a home game at Veterans Memorial Stadium,” Jones said. “We are ready to get it going. We have spent countless hours, visited many places and we viewed over 100 different protocols on what other schools are doing. We feel really good about where we are.”

Protecting students and fans are top priorities entering this weekend’s home game. Up to this point Jones believes they have been successful at doing that and because of that he is ready for Saturday.

It hasn’t been any easy journey for Jones and his staff. Paired up with his associates Sandy Atkinson and Kyle George, Jones has been working towards Saturday’s game for several months. While Atkinson has headed up return to play scenarios, Kyle George has worked with getting games back at Veterans Memorial Stadium.

“Sandy has been working on her project for about four months and Kyle has been working on his for about three months,” Jones said. “I have been involved with both of them. We have looked at over 100 different protocols. We have worked with the city, with the state, our medical group, the university leadership to make this possible. It’s been a labor of love from the return of play to the return of games.”

Communication has been key Jones during the process. Conversations with opposing schools’ athletic directors as well as their administrators have taken place daily.

Jones announced that the stadium capacity will be anywhere from 30 to 50 percent full for home games this season. Along with season ticket holders there will also be up to 3,000 students at each game. Members of the band along with the cheerleaders will also be in attendance.

Gates will open two hours prior to kickoff. All fans will have to wear masks when not eating or drinking.

The Troy Trojans are one of two Sun Belt Conference teams yet to play a home game. They will get... read more