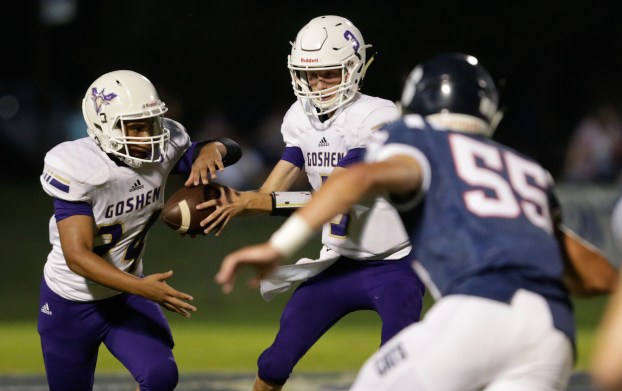 Eagles get back to work after week off

The Goshen Eagles return to action after a week off and will travel to Dadeville to take on Dadeville Tigers on Friday night.

The Eagles come into the game in search of their first win, entering the game with an 0-3 record in the games they have played. They had two non-region games canceled at the beginning of the season.

It was a productive week off for the Eagles. Coach Snyder and Goshen went back to the basics.

“We had a week off and our guys worked extremely hard,” Snyder said. “We are continuously working on ourselves and developing leadership.”

It hasn’t been the start that Snyder or the Eagles would have wanted, but with a young team mixed with veteran leaders every practice and every game is about building for the future.

“It’s been an uphill battle with youth and inexperience,” Snyder said. “I would say we are in one of the tougher regions anywhere. None of us likes losing, but we are seeing improvement each week. We working people in and making sure they are getting work. The senior class has been unbelievable. The leadership they have shown these younger guys will leave them with the understanding of what it takes to be a winner on the field.”

The Eagles will travel for the third time in the young season. They will take on a 3-2 Dadeville team that is coming off an 18-7 win over LaFayette last Friday night.

The Tigers have allowed a total of 14 points over the course of the last two games. On the season they have allowed 24 points per game, while their offense has averaged 16 points.

Pike County added four additional cases of COVID-19 on Thursday, according to the Alabama Department of Public Health. The county... read more