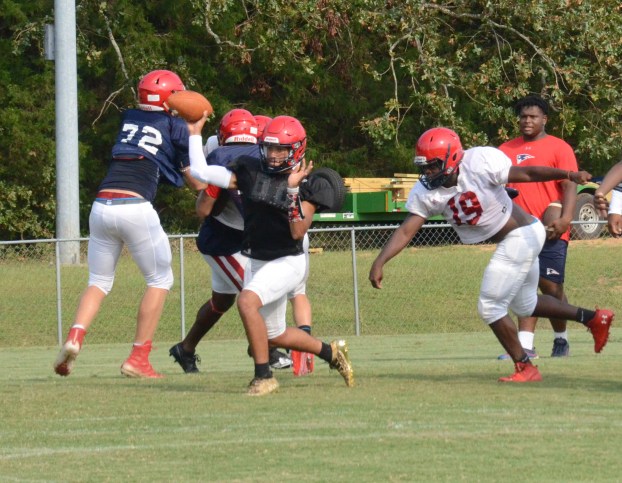 Patriots hit the road to take on Tuscaloosa Academy

After falling for the first time last Friday evening, the Pike Liberal Arts Patriots look to get back on track Friday night against Tuscaloosa Academy in Tuscaloosa.

The Patriots fell to Chambers Academy 44-25 last Friday night and fell to 4-1 on the year.

“That loss was squarely on my shoulders,” head coach Mario White said. “I was uncomfortable with what I was doing all game long. Coach Allen put together a good gameplan and they executed flawlessly. I didn’t put my kids or my coaches in the best position to succeed. I didn’t have my kids prepared.”

Two Patriots will make their return to their old stopping grounds on Friday. Head coach Mario White and son Mayes White will return to a place they called home for so many years.

“It’s going to be very emotional,” coach White said. “I transferred in there as a tenth grader in 1996. My son and my daughters were raised there and my wife was the cheerleading coach there. Eighty percent of their roster I coached from the fifth grade to where they are now.”

Despite putting up 342 yards of offense, the Patriot defense allowed 44 points on Friday after entering the game on two-game shutout streak. The Patriots immediately turned the page after last Friday night’s loss to the Rebels and got back to work.

“We went back to work,” White said. “It was one game and we flushed it. Everything we want is still out in front of us. We took it as this is what we did wrong now what do we need to do to fix it. We watched the game together and then got back to work.”

The Knights enter Friday night’s game 2-3 on the season and are currently on a three-game losing streak. In their losses to Bessemer Academy, Patrician Academy and Escambia Academy, the Knights have allowed 32 points per game, while their offense has averaged 14.

“I expect a lot of pressure,” White said. “Coach Todd Bradford is a guy who has never seen a blitz he didn’t like. We have worked all week on picking those up. Offensively, it’s going to be like facing our evil twin. He likes to throw it around as much as I like throwing it around. It’s going to be an exciting game.”

Kickoff between the Patriots and the Knights is scheduled for 7 p.m.

Despite stadium capacity restrictions in place for the 2020 Troy Football season, Troy University students will still have the opportunity... read more