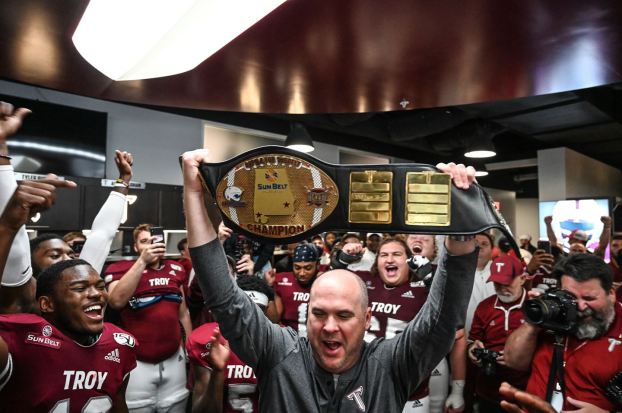 Due to South Alabama pausing its football workouts because of COVID-19, Saturday’s “Battle for the Belt” between Troy and South Alabama has been postponed, both schools announced Tuesday.

“This postponement is unfortunate, however it’s prudent and wise.  Our most significant concern is the well-being of our student-athletes,” USA Director of Athletics Joel Erdmann said in a release.  “We are looking forward to hosting Troy at Hancock Whitney Stadium at a date to be determined.  We appreciate the collaboration and understanding of Troy, and the leadership of the Sun Belt Conference office in working through this situation.”

This marks the second time this season that Troy has had their current schedule altered due to COVID-19 concerns. Troy’s season opener against Louisiana Monroe was rescheduled for the end of the regular season.

“We are obviously disappointed for our team but certainly respect this decision,” Director of Athletics Brent Jones said. “This is a tremendous rivalry game for both teams and fan bases, and I appreciate South Alabama Athletics Director Joel Erdmann and the Sun Belt Conference for their open lines of communication during this process. We look forward to welcoming our great fans back to The Vet on Oct. 10 when we host Texas State in our home opener.”

Troy, South Alabama and the Sun Belt Conference will work together to determine if there is a mutual date that the game could be rescheduled later in the season.

Troy and South Alabama do not share a common off date until December 12, which is the current date of the Sun Belt Conference Championship. South Alabama’s next open date is on October 17, while the Trojans are scheduled to play every Saturday throughout the rest of the regular season.

Troy will now turn its focus to its home opener against Texas State on Oct. 10 at Veterans Memorial Stadium; kickoff is set for 11 a.m. and the game will be televised on ESPN2.

A Troy man is charged with capital murder in connection with the August 15 fatal shootout at the Pike County... read more