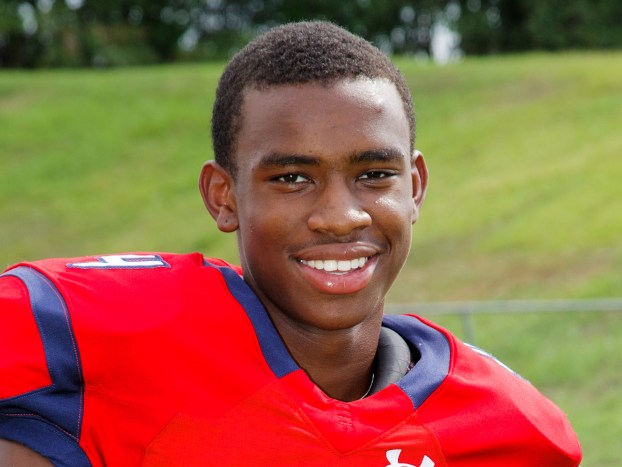 Taylor turning into a weapon for the Patriots

After a winding road led him to Pike Liberal Arts, wide receiver Jay Taylor has turned himself into a potent weapon in the Patriot offense.

Taylor and the Patriots traveled to LaFayette last Friday night to take on Chambers Academy. Despite losing to the Rebels, The Patriots have gotten off to a 4-1 start this season. Taylor believes the loss was a nice wakeup call for the team.

“We needed that loss so we can come together,” Taylor said. “We realize now what we did wrong. We are going to regroup and come back better next week.”

Taylor finished the game with just three receptions, but he finished with 114 yards and two of his catches went for touchdowns. Despite his high numbers, Taylor believes he could have done more.

“Nobody wants to talk about themselves after a loss,” Taylor said. “I feel like I did ok, but I could have done more things to help change the outcome. I had a great quarterback throwing me the ball and I did everything the best I could.”

Through three games this season, one of Pike’s wins came by way of a forfeit; Taylor has 16 receptions for 548 yards to go along with eight touchdowns. He is averaging 34 yards per reception and has scored on 50 percent of his completions.

Taylor, who is six-foot-four, believes making big plays is expected out of him.

On Friday Chambers looked to limit Taylor’s down field ability. Because of that Taylor had to work closer to the line of scrimmage. At least on one play, Taylor wasn’t affected.

“We knew they were going to take away our deep stuff,” White said. “We worked all week on our intermediate stuff. We were trying to get the offense going and we called a bubble screen and he made five guys miss and went 80 yards with it. Every time he touches the ball there is a chance he’s going to take it to the house.”

The one time Charles Henderson Trojan initially transferred to play his final season at Carver High School under his father. During the summer, with uncertainties mounting due to COVID-19, Taylor began working out with the Patriots.

“He (Coach White) let me in and allowed me to work out with his team,” Taylor said. “When things didn’t go right at Carver, I called coach White and he gave me a chance here. The rest is history.”

White immediately fell in love with Taylor’s drive and competitiveness.

“He is highly motivated and competitive,” White said. “He is an outstanding kid. He works a lot with the younger kids and what you see on Friday nights is exactly what you see Monday through Thursday.”

White was one of a handful of players to transfer into the program this summer. It was a smooth transition for Taylor and his teammates when they arrived on campus to meet their new teammates.

“When we got here we told them (teammates) this is still their team,” Taylor said. “When we got here they welcomed us with open arms. We all have one goal and we have worked together as one.”

White is one of many weapons on the Patriot offense. Joining, quarterback Mayes White, running back Aaron Greenwood and fellow receivers Mario Davenport and Elijah Caldwell, Taylor believes any one them has a chance to be special on any given night.

“It’s great to know that if you have a bad game there is someone else to have a great game,” Taylor said. “When I’m not on, Elijah will be on. When Elijah isn’t on we got Mario, Greenwood and Mayes. There is never a game when all of us are off.”

Taylor and the Patriots will remain on the road this Friday night to take on Tuscaloosa Academy.

Beginning in June 2021, The Pike County tax collecting official will have the authority to auction and sell tax liens... read more