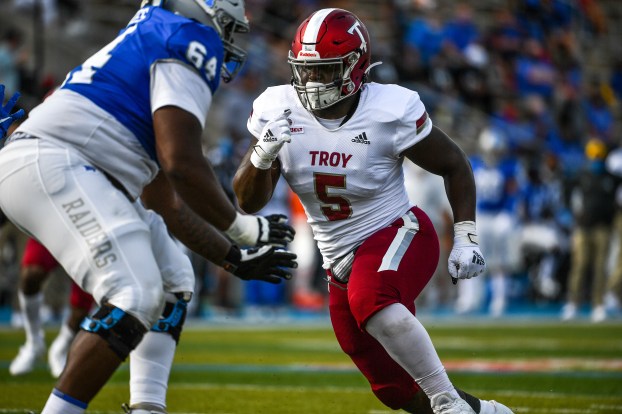 The Troy Trojans put their 1-0 record on the line Saturday evening when they take on nationally ranked BYU in Provo, Utah.

It will be the second consecutive game the Trojans will be featured on ESPN.

The Trojans knocked off Middle Tennessee State last Saturday. They will get their first chance of the season to knock off a nationally ranked opponent.

“We’re really excited to have gotten off to a great start last Saturday,” head coach Chip Lindsey said at his weekly press conference. “Very familiar with that program (BYU) from a far and we are excited to be able to out there and play them. They are coached by Kalani Sitake, who I know a little bit. When you watch his team play I think you see a very well coached team that plays very physical and disciplined. He has a passion for the university.”

The Trojan offense finished the game with just under 500 total yards of offense. In his first career start, quarterback Gunnar Watson completed 26-of-37 passes for 248 and two touchdown passes to senior wide receiver Khalil McClain.

Defensively, the Trojans forced three turnovers. The Trojans had three interceptions in the game, two of which by Terrance Dunlap.

“Defensively we played fast and physical and created turnovers which is always important,” Lindsey said. “I’m really pleased with the effort on that side. [Defensive coordinator] Brandon Hall and his staff put together a good plan.

Troy will make their first trip to the state of Utah for the first time since 2003 this weekend. They will be taking on a BYU team that is 1-0 after knocking off Navy 55-3 on September 7.

“They are a very big and physical up front on both sides of the ball,” Lindsey said. “It’s going to challenge us, but we are looking forward to that challenge. We are going to find out on Saturday just how tough we are. This is a great opportunity for us.”

After holding MTSU’s offense to 241 yards last Saturday, Troy’s defense will be tasked with stopping a Cougar offense that had 580 total yards against Navy, 279 of which came through the air.

“Zach Wilson is kind of where it starts,” Lindsey said “He is a really good player an I’m impressed with how he handles the team. I think he has 20 career starts. He is a veteran guy and he is a good athlete, make plays when things break down.”

BYU’s defense held the Midshipmen to 149 yards in their last contest. 119 of the yards came on the ground.

“They are very good at what they do,” Lindsey said. “They are very disciplined. They execute what they do very well. It starts with Khyiris Tonga, their defensive tackle. He is a phenomenal player, a big, physical guy. He can dominate, so we have to have a plan.”

This will be the first meeting between the two schools. Kickoff is scheduled for 9:15 p.m.

Those unaware of the Mask-A-Rade Membership Celebration at the Johnson Center for the Arts Thursday night did double-takes at the... read more