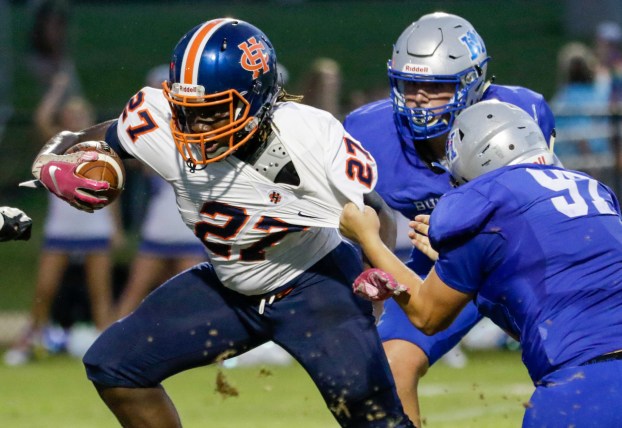 The Charles Henderson Trojans remain at home on Friday night to host Williamson in what will be their fourth consecutive home game to begin the season.

“We have had a good week,” head coach Brad McCoy said. “Finally getting back to normal after last week. It was nice to get back to our regular routine.”

It hasn’t been the start that head coach Brad McCoy and the Trojans would have wanted. They have failed to take advantage of the early season home stand that sees them play four-straight home games. The Trojans hope to pick up their first win of the season on Friday against Williamson before going out on the road next Friday to take on Pike Road.

“Anything less than a win isn’t going to make these guys feel good,” McCoy said. “We have played good at times, but the only way to get rid of a feeling of not being successful is to be successful. Being successful in football a lot of time boils down to winning. I really think that’s what it’s going to take to get these guys going in the right direction. They aren’t satisfied with just playing good. They want to win.”

The Trojans are coming off a 45-12 loss to region foe Andalusia last week. The Trojans’ 12 points was one off their season high; they scored 13 in the season opener against Montgomery Catholic.

Zach Coleman led the Trojans on the ground on Friday night, rushing for 49 yards on 15 carries.

With the 33-point loss the Trojans have been outscored 93-25 in the season’s first three games.

“It may take some more time or it may take a spark on defense, something to give them (offense) a boost,” McCoy said. “With the young guys and the lack of experience it’s going to take some good things happening around us.”

Unofficially, this will be the first-ever regular season matchup between the Lions and the Trojans. The Trojans have made it a habit in recent years to play a team from either Mobile or Baldwin County. They have taken on Baldwin County High School the past two seasons and UMS-Wright in 2016 and 2017.

The Lions come into the game 3-2 on the season. They defeated W.S. Neal 14-3 last week. While the Trojans are used to playing at home, the Lions have spent much of their season on the road. Including this Friday night’s game, five out the Lions’ first six games have been played on the road.

“We have watched film on them all week and we have three games on them,” McCoy said. “They have a very athletic group.”

After falling to Faith Academy and St. Paul’s, the Lions have rattled off back-to-back wins.

Their defense has been a strength in 2020, allowing an average of 15 points per game, while the offense is averaging 14 points.

“They have a five-star linebacker who is an Alabama commit,” McCoy said. “They have a small roster of 25 guys. The guys they have play really fast. They will line up in the spread on offense and will have an odd front on defense.

After being off last week, the Pike Patriots are back at it this Friday evening. The Patriots will travel to... read more