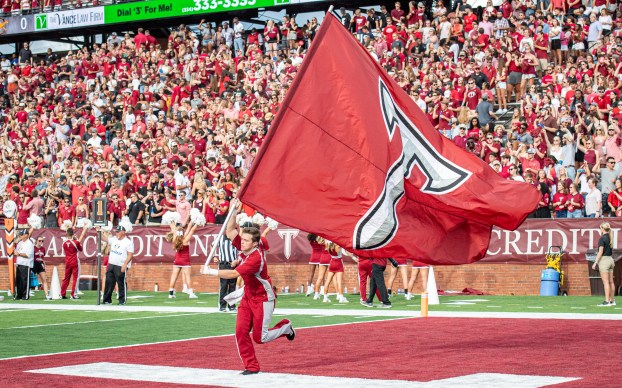 Watson, McClain lead the Trojans in comfortable win over MTSU

After falling to Middle Tennessee State in their last meeting in 2012, the Trojans retained the Palladium trophy on Saturday.

Watson completed 26 of his 37 passes and threw two touchdowns. Both of Watson’s touchdowns went to wide receiver Khalil McClain. McClailn hauled in touchdown passes of eight yards and five yards. McClain finished with 75 yards of receiving.

The Trojans entered the season with a loaded back field led by senior B.J. Smith. On Saturday, the Trojans rushed for 240 yards led by Smith who rushed for 81 yards. Charles Strong rushed for 54 yards and added a touchdown, while Jamontez Woods finished with 34. DK Billingsley and Kimani Vidal both rushed for touchdowns.

In all, the Trojans finished with 496 total yards, while holding the Blue Raiders to 241. Defensively, the Trojans forced three turnovers, two of which were interceptions by Terrance Dunlap. Craig Slocum had another interception.

The Trojans scored 19 points in the second quarter and 14 more in the third quarter.

Saturday’s game is the first of two meetings this season between the Trojans and the Blue Raiders. The two teams will meet in Troy on November 21.

The Trojans will be back in action next Saturday night when they travel to Provo, Utah to take on the BYU Cougars beginning at 9:15 a.m.

Troy at Middle Tennessee Moved to 2:30 p.m. Kick on ESPN

Troy’s football season opener at Middle Tennessee tomorrow has been moved to a 2:30 p.m. kick and the game will... read more