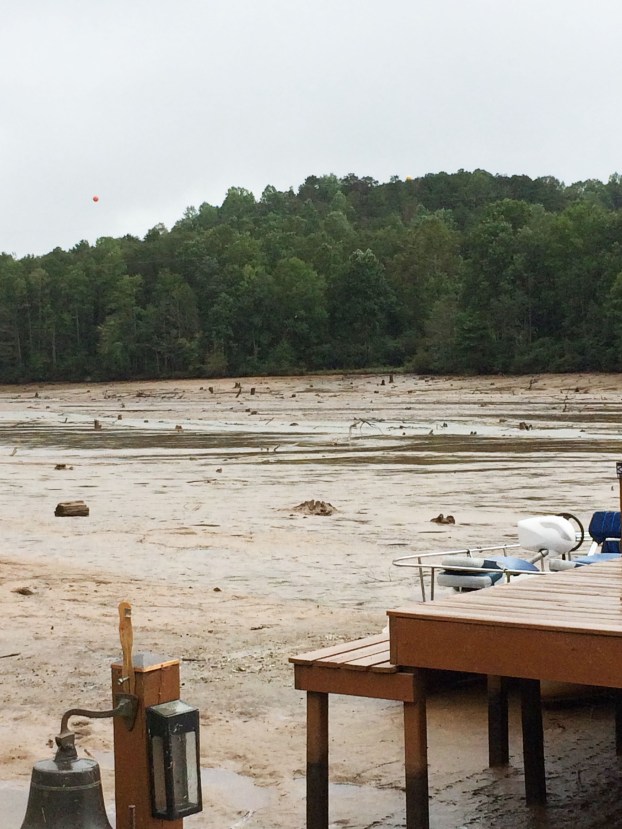 Above, the lakebed at Palos Verdes was a muddy mess on Thursday, after a dam broke under the weight of Sally’s rainfall, draining the lake into the Pea River.

Storm washes out roads, overflows dams and drains a lake

While the roads flooded, the lakes and ponds drained, all thanks to a storm named Sally.

Sometime overnight Wednesday, the remains of Hurricane Sally played havoc with the lake at Palos Verdes in Troy. And when the sun came up Thursday, what was once a serene lake was a vision of stumps and mud.

Jerry Williams, a resident of the gated community, said Sally dumped more rain water into Palos Verdes Lake than the dam could hold back.

“The water overflowed the dam and took out what was probably a 30-foot gap in the dam,” Williams said. “Once the gap was breached, the water was released. The rushing water took out the boat house and at least one boat. The water rose so high that some of the docks that were held down by big wood beams in the lake bed, actually floated out of the water.

“All the water is gone now except for a small pool at one end of the overflow. There’s just no sustainable water.”

Williams said the lake covered about 30 to 40 acres and there is probably unknown damage along some areas of the lake front.

“It will take a good bit of repair before the lake will function like it had,” he said.

Prior to the arrival Sally, there was a low place in the dam for overflow. However, Williams said the overflow was of such magnitude that it could not be handled. The grassy part of the dam was washed down to the Pea River.

“Everything went with the water, fish and all,” Williams said. “There should be pretty good fishing in the Pea River for a while now.”

The storm brought more than 10 inches of rain to Pike County, flooding streets and drainage ditches, overflowing dams and leaving a muddy mess in its wake. Schools remained closed on Thursday, as officials waiting to determine the status of roadways and bridges.

In the City of Troy, sporadic flooding areas such as Spradley Drive and Franklin Drive were addressed and water receded, while utilities crews worked overnight Wednesday to restore intermittent power outages. By morning, the utilities department was able to send a mutual aid crew to Evergreen, to assist with recovery work in that city.

The county initially identified 82 county roads were closed due to flooding, trees being down or a combination of both due to the heavy rains from Hurricane Sally, said Pike County Commissioner Chad Copeland.

“We are still assessing the road damage but it is widespread so the number of roads affected is fluctuating,” Copeland said. “The roads are being prioritized according to areas where people are stranded or stuck. Where trees are down and making roads impassable, they are being cut as fast as possible.”

Copeland said near Little Oak there is an extremely deep wash and two spots on the dirt road across from Rogers Schoolhouse that are washed out.

“There are a lot of road closures due to water washes and trees being down,” Copeland said. “If there had been a lot of strong wind along with all that rain, and the ground being so soaked, we would really have been in trouble.”

Copeland said he heard reports of 12 inches of rain around Springhill and 13 inches in the Pronto area.

“Right now, we don’t have an assessment on the cost of the road damage, but it will be major, Copeland said.

Copeland expressed appreciation to the Pike County Road Department for being on the job and assessing the damage to make sure emergency traffic could get where it needed to go during the rainstorm.

“We’ve go bunch of dedicated and hardworking guys,” Copeland said. “They are out there, and have been out there, assessing the damage and doing the work that has to be done to get our roads open as soon as possible.”

Heath Deramus is one of the, Pike County pond owners whose ponds were lost when Sally dumped a tremendous amount of rain on Pike County Wednesday night.

Deramus realized that his one-acre pond just off Butter and Egg Road was in peril around 1 a.m. For a while, the pond water trickled over the dam and then began to carve a stream bed over the dam.

“It just got where there was more water pouring over the dam than it could support,” Deramus said. “When that happened, the dam broke and I lost my pond.”

The dam will have to be rebuilt and even then, it will be a while before the pond is back to where it was before Sally came around, he said.

Trojans took to bounce back after rough start

The Charles Henderson Trojans have started the 2020 season 0-2, but head coach Brad McCoy and the Trojans are hopeful... read more