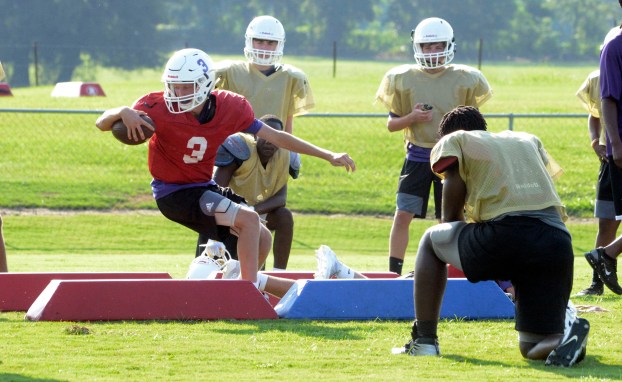 After months of summer workouts and hot days on the practice field, the Goshen Eagles will finally see some game action when they visit Trinity on Friday night in Montgomery.

The Eagles have watched other teams get on the field to play in recent weeks. After waiting patiently the Eagles will not only start their season on Friday, they will also begin region play.

“There is a lot of excitement,” head coach Bart Snyder said. “It’s been a long time since this time last year. Coming back and getting started in July and continuing to practice and not play, it’s a long time. They have had excitement seeing other teams playing and hearing the scores. It’s exciting knowing that tomorrow night, it will be our turn.”

The Eagles players have watched the news this summer. They are well award of the current state of athletics at all levels. Despite all the negative news surrounding athletics, the Eagles have worked hard all summer long despite not knowing if they were going to play or not. Friday night will be their reward.

With all the extra time to prepare, Snyder believes his team will be ready to play despite being a young and inexperienced team. They key for the Eagles is transferring their hard work into success on Friday night.

“We are as ready as we can get,” Snyder said. “The young men have worked extremely hard and they put in the time. They have put in the time and they have been very understanding with everything that is going on. They have done a great job at getting prepared, but it’s nothing like playing in a real game. There is something different when the lights turn on.”

They will be going up against a Trinity team that already has two games under their belt. Trinity began the season with a win over Alabama Christian. They fell last week to Montgomery Christian.

“This will be week three for them and they have played some good competition,” Snyder said. “Hopefully we can be good competition for them tomorrow night. Get some of these jitters out and keep the game close so we can win in the third and fourth quarter.”

The Wildcats are under new leadership in 2020. Head coach Granger Shook takes over for former head coach Barry Loyal. Snyder believes Shook will have his players ready to play.

“They are a good ball team,” Snyder said. “Snook does a great job with them. He is a young coach who is eager to be there. He has them looking good.”

The line was longer than long but those who shunned the hot September sun waited patiently. After all, those who... read more