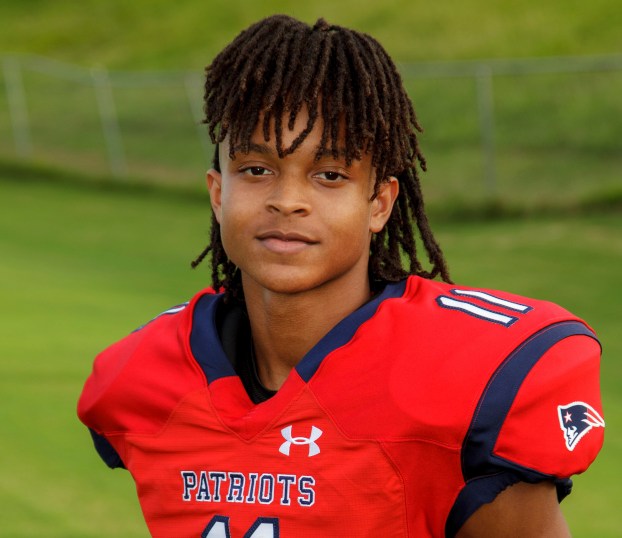 The Pike Liberal Arts Patriots welcomed in plenty of new faces in the offseason, many of whom made a good first impression in game one. Perhaps making the biggest impression in week one was senior Elijah Caldwell.

The Patriot offense got off to a slow start in the first half thanks in part to a driving rainstorm. They did however score their first touchdown of the season when quarterback Mayes White connected with Caldwell on a 62-yard touchdown completion. The Patriots outscored Crenshaw Christian 35-7 in the second half and went on to win their first game of the season, 42-12.

“It felt great,” Caldwell said. “It was a great win. It was a new team with great players and great coaches. It’s an honor to just be playing with them.”

The win for the Patriots gave their new head coach his first-ever varsity win. At the end of the game, Caldwell and the Patriots made sure everyone knew about the accomplishment when they emptied the water cooler over the coach’s head.

Caldwell played a big role in the Patriots’ win. He finished the evening with six catches for 132 yards and two touchdowns. He finished with 28 rushing yards on four carries. For his efforts, Caldwell was named the Patriots’ Offensive Player of the Week.

“I played as hard as I could,” Caldwell said. “I keep everything in God’s hands and I pray. I gave everything that I had.”

Caldwell made the move across town from Charles Henderson High School over the summer and admits the transition at times was tough.

“It was hard moving,” Caldwell said. “The community and the players welcomed us with open arms.”

Caldwell isn’t the only newcomer to the Patriots offense this summer. Numerous players including quarterback Mayes White and receivers Jay Taylor and Mario Davenport are newcomers as well. Davenport was named defensive player of the week after he had an interception returned for a touchdown as well as two tackles for a loss.

“With a great quarterback like Mayes and all the help around me, it’s always great to have the extra players around,” Caldwell said.

This was the second game for the Patriots. The Patriots played Bessemer two weeks ago in an exhibition game. Caldwell and the Patriots lost the game, but Caldwell believes that game helped his team get ready for Crenshaw Christian on Friday night.

Caldwell and the Patriots will remain at home this Friday night when they host the Hooper Colts in the 2020 region opener beginning at 7 p.m.