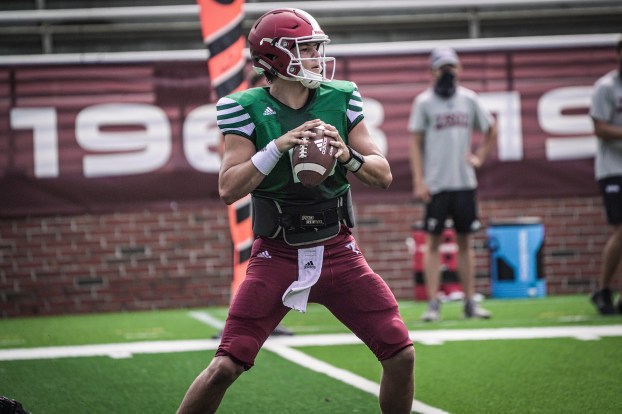 With exactly two weeks until Troy opens the 2020 season against Louisiana-Monroe, head coach Chip Lindsey on Saturday announced that Gunnar Watson is the team’s starting quarterback.

Watson, who was in a battle with Jacob Free and more for the starting spot, received the bulk of the first-team reps during Troy’s scrimmage inside Veterans Memorial Stadium. At the end of the scrimmage, Lindsey announced his decision.

“Throughout the whole camp and preseason practice (Gunnar) has been the most consistent quarterback,” Lindsey said in the press release. “Gunnar has to do a good job to keep that spot but we will go with him in game one as our starter.”

During the scrimmage, Watson found receiver Kaylon Geiger in the endzone for a touchdown pass.

“I’m excited and ready to play some ball,” Watson said. “(Being named the starter) gives you a little more confidence and gets you going to lead the team.”

Serving as a backup behind starter Kaleb Barker in 2019, Watson played in a total of six games, including the entire second half against Missouri. Watson completed 13 of his 22 passes for 89 yards. His longest completion was for 25 yards.

Before ultimately redshirting, Watson played in two games as a freshman during the 2018 season. He completed eight of his 12 passes for 45 yards. His longest completion was 12 yards.

Before coming to Troy, Watson was a four-year starter at Taylor County High School in Georgia. He threw for over 6,700 yards and had 65 touchdowns for the Vikings in 43 career games.

The Trojans will open up against the Warhawks on Saturday, September 5.

Not even 24 hours after the Trojans released their 2020 schedule, their first opponent, Louisiana-Monroe, has announced they were halting... read more