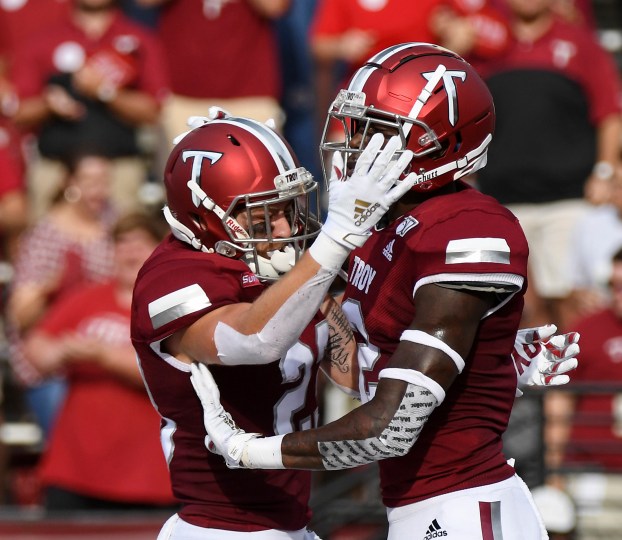 The Troy Trojans released their 2020 football schedule on Thursday afternoon. The schedule will feature 12 total games, six of which will take place inside Veterans Memorial Stadium.

Jones said during his press conference that around 196 different schedules have been discussed in the past three weeks. Playing 12 games including six at home was a goal for Jones when making out the schedule. As of Thursday’s release, Troy is one of six schools in the country to have a 12-game schedule.

“I really wanted six home games for our student athletes, our community, for our fans and for our season ticket holders,” Jones said. “I wanted to have 12 games. Our student athletes deserve this. This is what they are working for since we brought them back on June 1.”

The schedule will feature four non-conference games including two against long-time rival Middle Tennessee State. The Trojans will also play BYU on the road and Eastern Kentucky at home.

The Trojans last played the Blue Raiders when Middle Tennessee State was in the Sun Belt Conference in 2012. “The Battle for the Palladium” dates back to 1936. Troy has knocked off the Blue Raiders in six of the last eight games. The two teams will have two games to rekindle their rivalry this season.

“This is a great rivalry,” Jones said. “Our schedules matched up. It’s exciting. It’s not unprecedented. MTSU played Western Kentucky back-to-back weeks two years ago. Memphis and Cincinnati have done it. The key for us was having enough separation. It’s going to be exciting. They are a good team and it’s a great rivalry. They are looking forward to us coming up there and we are looking forward to have them coming back.”

Troy’s annual rivalry game against South Alabama will occur on October 3 at brand new Hancock Whitney Stadium in Mobile. It will be one of eight conference games for the Trojans this season.

Troy’s game against Texas State is the lone mid-week game on the schedule for the Trojans. Kickoff is set for Thursday, October 8.

The Trojans will play their final home game of the season on Nov. 21 against MTSU before wrapping up the regular season on November 28 against Appalachian State in Boone, North Carolina.

The Sun Belt Conference Championship will be played on December 5.

Jones announced that capacity at Veterans Memorial Stadium will be reduced this season. More details will be announced on Friday.

“We’ll be at a reduced capacity, but we’re also going to be safe and healthy,” Jones said. “We are going to follow all local and state ordinances that we need to.

Game times are still to be determined.

Troy University reported nine new student cases of COVID-19 on Wednesday, including two at residence halls with prior cases. The... read more