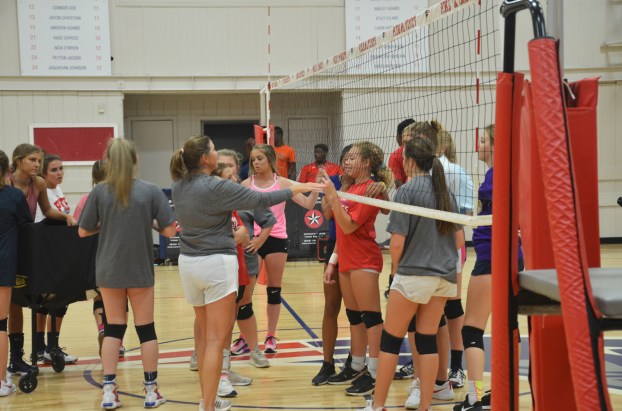 Jones leads the Lady Patriots into the 2020 season

The Pike Liberal Arts volleyball team rides into the 2020 season under new leadership. The Patriots open the season on Thursday against Fort Dale with new head coach Lara Lee Jones at the helm.

“I think the girls are really excited,” Jones said. “This is a really talented group of girls that need to come together as one and I think we are getting there.”

Jones spent seven seasons at Lakeside before making the move to Pike Liberal Arts. After starting the program at Lakeside. Jones was hesitant at first to make the move to Troy.

“Change scares me,” Jones said. “I was a little nervous. It’s different, but the timing was right. It’s been exciting and I’m ready to take this team to a different level.”

The Patriots like so many teams have had to adjust to the new normal due to COVID-19. The Patriots are doing whatever they can to follow the safety protocols handed down

“What’s right today may not be right tomorrow,” Jones said. “We all have our own little boxes. We don’t invade each other’s privacy. We are trying to make sure we stay sanitized and cautious. We talk about making sure that we do our best to stay on top of things and do our best to not make dumb decisions. They are excited about the season and not having anything come up that stops the season.”

The Patriots finished last season .500. This season they welcome back plenty of returners, while also bringing in a few new faces.

“We have a lot of people coming back that have game experience,” Jones said. “The one thing that I ask of my seniors is be better than they were yesterday. You can only get better if you want to get better. We are working on it and getting better.”

“Griffin is a about six foot one and is a beast,” Jones said. “White has never played before but is very athletic. I’m excited about these girls. The athletic talent that is here is exciting to watch.”

The junior varsity Patriots will start at 4 p.m. with the varsity following shortly after.