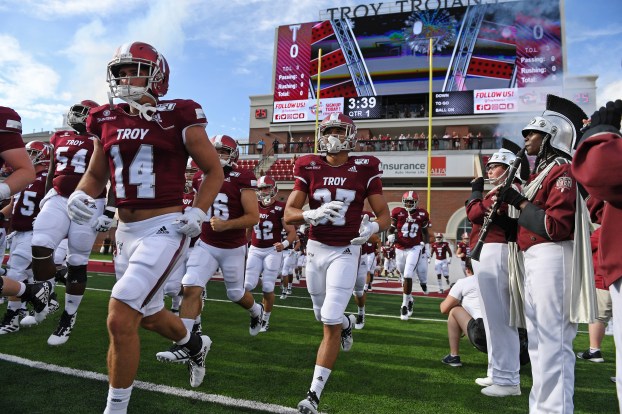 Troy players take the field during the first half an NCAA college football game against Campbell in Troy, Ala., Saturday, Aug. 31, 2019. (Photo/Thomas Graning)

With news changing everyday, athletic directors and university presidents all over the country are playing the waiting game just weeks away from the scheduled start of the 2020 season.

With the Big 10 and Pac-12 Conferences having already decided to postpone fall sports until at least the spring, the fear of many of not having a college football season has suddenly become a possibility.

Although there are many known facts about COVID-19, according to Dr. Michael Carroll,  the Associate Professor of Sport Management and the Hospitality and Sports and Tourism management Coordinator at Troy University, the main force driving teams and conferences to postponing seasons is uncertainty.

“Much like all of us in the U.S. have been faced with anything from quarantine to facemasks, there are a lot of uncertainties with COVID-19, specifically as it relates to long term detriment to those who test positive for it,” Carroll said. “ For these athletic directors, they are trying to balance a real desire to have a college season and the revenue it brings in and protecting the health, safety and wellbeing of the student athletes.”

One of the biggest questions surrounding the prospect of a lost season is revenue. With so many athletic programs relying on football, the lost revenue may be crippling to some programs. Schools like Stanford have already cut programs in anticipation of the lost revenue. Carroll believes revenue has played a big role when it comes to schools deciding to have a season or not.

“I don’t blame them for that,” Carroll said. “At the end of the day someone has to pay the light bill. That revenue that comes from playing college football is immense. Not just in terms of ticket sales, but TV rights alone is worth a lot of money. A lot of Group of Five teams get paid a lot of money to play at Alabama and Tennessee or wherever it may be. For a lot of schools that money funds a large part of their academic department and for all of a sudden not to have that, it’s like having a family of four and one of the breadwinners loses their job. How are they going to exist.”

The Power 5 conferences generated nearly 3 billion dollars in revenue during 2019 with the Big 10 earning $780 million, the most of any conference. Although the Power 5 schools will no doubt be dealt a heavy blow if the season doesn’t get underway, Carroll believes it will be the Group of Five conferences that will be impacted more heavily.

“Those budgets can take a hit and their still going to have big boosters who are going to give big money,” Carroll said. “Where it hurts the G5 more is that they don’t have that cushion that some of the larger schools do. It’s a problem that doesn’t have a good solution.”

Along with the prospect of not having a season, there is another factor at play that Carroll believes has largely gone unnoticed to the average college football fan and it’s something that is affecting the minds of a lot of decision makers.

“We are seeing a time in which college athletes are awakening to the power that they hold and it started with the name, image and likeness discussion,” Carroll said. “Student athletes at the college level generate a lot of revenue for a lot of programs. Big time college sports is big time business. These student athletes, while they are certainly compensated in terms of scholarships and room and board etc., there has been a rising clamor in recent years that they’re not being compensated enough. I think you’re seeing a lot of student athletes realize they have a lot of power.

There is currently no union in college sports, but players have tried in recent years. Carroll believes with all the question marks swirling around college football, that decision makers are aware of the fact that student athletes are attempting to unionize and take some of the revenue.

“Some of these conferences and decision makers are worried that these players are going to figure out some way to collectively bargain and it’s going to ruin or disrupt the notion of NCAA amateurism and revenue splits are going to change moving forward,” Carroll said.

Even if college football returns at full capacity in 2021, Carroll believes that with the virus still out there things are changing for good.

“I definitely think that times are changing for good, not just with respect to sports, but in general. I think things are going to be different in this country moving forward,” Carroll said. “There is going to be more of an emphasis on cleanliness and personal hygiene standards moving forward and people are still going to shy away from crowds. How does that impact college sports? The advent of a vaccination and knowing more about the disease will help, but I’m not sure we are still going to be packing 100,000 people into stands even a year from now.”

Alabama surpassed 100,000 coronavirus cases on Wednesday, as 875 new cases and 33 new deaths were reported. According to the... read more