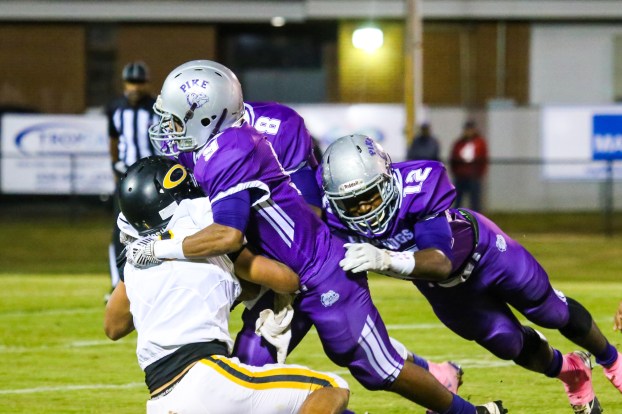 Pike County Schools to play only region games in 2020

The Pike County Bulldogs and Goshen Eagles will have their 2020 football schedule cut to seven games this season after Dr. Mark Bazell and the Pike County Board of Education declared that only region games will be played during the upcoming high school football season.

The school passed the plan to play region only games during Monday night’s Board of Education meeting.

“First and foremost, we want to keep our kids safe,” Bazell said. “We want to honor our commitment to play region games because those are the ones that have barring for the playoffs. Number one factor is safety.”

The Goshen Eagles were all set to open the 2020 season on August 21 at home against Holtville. Instead, their opener will now be two weeks later on the road against Trinity.

“Our schools systems have been left to make decisions that are best for our kids and their parents and guardians,” Goshen head coach Bart Snyder said. “They are doing what they feel is 100 percent right.”

The Bulldogs were scheduled to start the regular season on August 28 against Hillcrest Evergreen, but will now start the season on September 4 when they host Beulah.

“As we talked as a group, myself, the principal and the superintendent, this is something that we agreed on,” Pike County head coach Fred Holland said. “Number one is the safety of the kids and coaches. That’s more important than anything else. We are trying to do the right thing and I am going to do whatever they ask me to do so we can have a season.”

The Bulldogs were scheduled to take on Charles Henderson in the annual jamboree game on August 21, but that game too has been canceled.

“It was something that both schools wanted,” Bazell said. “They contacted us first about changing the location and then about canceling it all together. That was a preseason game and I just think playing a region-only schedule gives us the best chance to compete.”

Snyder believes the decision to play region games only was inevitable. With the school year quickly approaching, Snyder believes wise choices need to be made and he believes Bazell made the right choice.

“I think it’s the right thing to do,” Snyder said. “I’m going to support our system and I believe in what they do. Getting someone to make those decisions is hard to do.”

Goshen and Pike County will both make lengthy road trips this season. To make sure players and coaches remain healthy, there will be extra busses given for road trips.

“It’s very important,” Holland said. “Us having that much space will give us a great opportunity to travel safely and protect the kids and the coaches.”

Bazell announced that bands and cheerleaders will not be allowed on road trips this season.

Because of the cancellations, Goshen will now have three bye weeks, while the Bulldogs will have four.

“It’s going to be something different,” Holland said. “It’s going to give us time to heal and try to stay safe. It’s something I have never done before, but you can learn from anything and hopefully this situation will help us.”

“We are going to use the time to keep our guys in shape,” Snyder said.

After opening up against Beulah, Pike County’s remaining home games will be against Dadeville, Catholic Montgomery and Reeltown. They will be on the road against Trinity, Goshen and Childersburg. Goshen’s home games will be against Reeltown, Pike County and Catholic Montgomery. They will play on the road against Trinity, Childersburg, Dadeville and Beulah.

The Big Ten and Pac-12 won’t play football this fall because of concerns about COVID-19, taking two of college football’s... read more