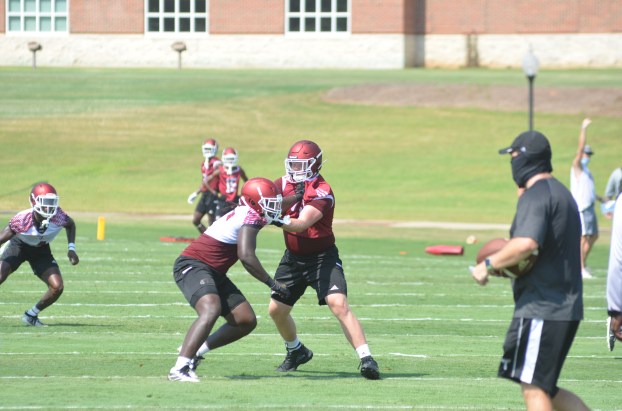 photo/Mike Hensley | The Messenger Two Troy players compete with one another during practice on Friday morning.

With season in question, Trojans express desire to play

The Big Ten Conference shook the college football world on Sunday evening when reports surfaced that they were on the verge of not having a football season this fall.

Power 5 commissioners met on Sunday and again on Monday to discuss the upcoming college football season amid the COVID-19 pandemic.

After several reports surfaced that the Big Ten conference was ready to pull the plug on the season, players across the country joined the #WeWantToPlay movement stating they want to play football this season.

Locally, Troy head coach Chip Lindsey met with some players on Monday morning to discuss the current college football landscape and to ask his players what their intentions were heading into the season.

“I met with the leaders of the team today and the response was unanimous, we want to play,” Lindsey posted on Twitter. “The work they have put in on the field and to follow all of the safety protocols must be commended. They deserve the chance to see their work payoff with a season; I stand with and support them.”

Troy Director of Athletics Brent Jones backed up and supported the comments of his head coach.

“I support our players and coaches thoughts and wishes,” Jones said on Twitter.

Several Troy players tweeted out messages in of support of playing this season. Marcus Rodgers, Logan Self, Jake Andrews and Kyle Coale were a few of the Troy players who expressed their desire to play this season.

As of Monday evening two conferences have postponed college football. The Mountain West announced they would postpone their season on Monday, joining the Mid-American Conference, which announced their postponement on Saturday morning.