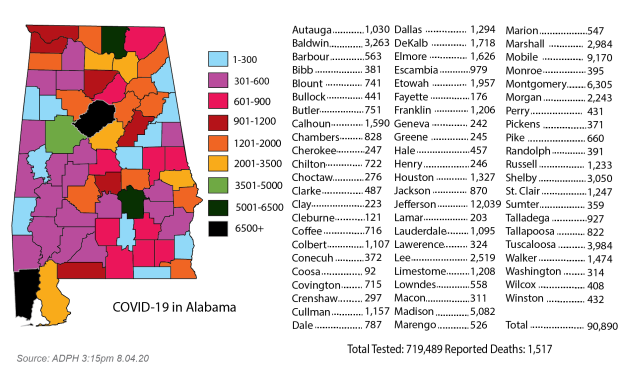 Troy City Schools officials are considering a later start to classes in a response to the spread of coronavirus.

Talking with members of the Troy Rotary Club on Tuesday via a virtual meeting, Superintendent Cynthia Thomas said state officials have granted local school districts the leeway to delay the return to classes because of the virus spread. Troy City Schools are scheduled to return to class on Aug. 20.

“We are looking to officially asking to amend the start date,” Thomas said, citing the opportunity to walk through safety procedures and the time available to train teachers on virtual instruction platforms.

“We have a meeting (Wednesday) morning to discuss this,” said Jonathan Cellon, chairman of the TCS Board of Education. The board has called a meeting for 7:15 a.m. Wednesday.

Cellon said school officials would meet Tuesday afternoon with community leaders and stakeholders in an effort to coordinate schedules, particularly with the governing officials.

Thomas has said previously leaders would consider the local virus spread and trends when approaching the start of school.

As of Tuesday, Pike County remained in the “high risk” category according to the Alabama Department of Public Health. However, no new cases of COVID-19 were reported overnight Monday, with the county holding steady at 660 cases with only seven confirmed deaths. Statewide, fewer than 1,000 new cases were reported overnight Monday, bumping statewide totals to 90,890. Tuesday was the first time since early July that the state saw fewer than 1,000 new cases in a day.

A statewide mask ordinance was extended until the end of August, and the ordinance requires students in grades 2 through 12 to wear masks when returning.

At Troy University, students return to class on Aug. 12. A free testing site opened on Tuesday, and university officials are urging all students to be tested for coronavirus before returning to campus.

Nationally, the United States continues to head toward the highest infection and death rates in the world. Fourth of July gatherings, graduation parties, no-mask weddings, crowded bars — there are reasons the U.S. has racked up more than 155,000 coronavirus deaths, by far the most of any country, and is fast approaching an off-the-charts 5 million confirmed infections, easily the highest in the world Many Americans have resisted wearing masks and social distancing, calling such precautions an overreaction or an infringement on their liberty. Public health experts say the problem has been compounded by confusing and inconsistent guidance from politicians and a patchwork quilt of approaches to containing the scourge by county, state and federal governzments.

“The thing that’s maddening is country after country and state after state have shown us how we can contain the virus,” said Dr. Jonathan Quick of the Duke Global Health Institute.

Confirmed infections in the U.S. have topped 4.7 million, with new cases running at more than 60,000 a day. While that’s down from a peak of well over 70,000 in the second half of July, cases are on the rise in 26 states, many in the South and West, and deaths are climbing in 35 states.

On average, the number of COVID-19 deaths per day in the U.S. over the past two weeks has gone from about 780 to 1,056, according to an Associated Press analysis.

In Massachusetts, health officials are investigating at least a half-dozen new clusters of cases connected to such events as a lifeguard party, a high school graduation party, a prom party, an unsanctioned football camp and a packed harbor cruise trip.

One recent house party on Cape Cod attended by as many as 60 people led to more than a dozen new cases and prompted some restaurants to close or limit service at the height of tourist season.

Hot spots around the U.S. are popping up in what once seemed like ideal places to ride out the outbreak: rural, less populated and with lots of outdoor space. In South Dakota, a spike erupted at a Christian youth summer camp in the Black Hills, with cases growing to 96 among 328 people who attended.

“We’re at a point where there’s enough spread of COVID-19 that people throughout the U.S. are at an increased likelihood of encountering the virus and getting exposed,” University of Florida epidemiologist Dr. Cindy Prins said.

She added: “This is a behavioral disease right now for a lot of people.” Prevention means “changing our behavior, and it’s so hard for humans to do. We’re social creatures.”

In Mississippi, Republican Gov. Tate Reeves grudgingly reversed course and announced a statewide order requiring the wearing of masks because of a resurgence of the virus. He also delayed the start of the school year for upper grades in eight hard-hit counties.

“Wearing a mask — as irritating as it can be, and I promise you I hate it more than anyone watching today — is critical,” he said.

In Virginia, cases have surged so much in cities like Norfolk and Virginia Beach that Democratic Gov. Ralph Northam placed limits there last week on alcohol sales and gatherings of more than 50 people. Northam, the nation’s only governor who is a doctor, cited rising infections among young people and said the problem is that “too many people are selfish.”

Native Trojan Dr. T. Bob Davis of Dallas enjoys a national and international reputation for his many contributions to dentistry,... read more