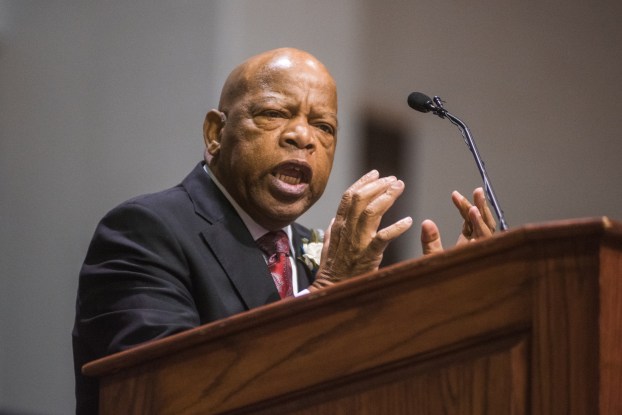 Lewis remembered as a ‘Do right’ young man

Claudia Butler was a classmate of Civil Rights Leader and Georgia Congressman John Lewis. Butler and Lewis were members of the Pike County High School Class of 1957. Butler said it was evident that Lewis was destined for great things, but she, nor any of her classmates, could have imagined that he would be a major  player on the national stage. She is pictured with Lewis when he spoke at Troy University.

Memorial tributes to Civil Rights Leader and Georgia Congressman John Lewis have been given throughout his home state, Alabama, across the nation and around the world.

“The Boy from Troy,” as Dr. Martin Luther King, Jr. referred to Lewis, was honored and remembered on Les Brown’s “Monday Motivation Call, a free Internet conference call. Claudia Butler, of Brundidge and a classmate of Lewis, was invited to tell her story on the program.
“John Lewis was a humble man but he was a fighter,” Les Brown said. “He fought for justice and right. He fought for the people. He lived a life of service and that is the greatest thing that can be said about anyone.”

Brown said Lewis was always willing to step up and fight, if necessary, in an effort to make life better for everyone.

“John Lewis fought the good fight,” he said. “John Lewis made a commitment (to justice and right) and he was dedicated to continue the fight until those who are unaffected are as outraged as those who are affected.”

Brown said Lewis’ story has merged into “our story” and Claudia Butler is a part of the story.

Butler and Lewis were classmates at Pike County Training School in Brundidge.

Tamara Williams, Butler’s daughter, laughing, told Brown that her mom has one small photograph of her in the living room but a large, framed photograph of her with Congressman John Lewis, who she said is an “extraordinary human being.”

Even as a teenager, Butler recognized that John Lewis was no ordinary young man.

“John Robert came to Pike County Training School in the ninth grade along with  the other children who had gone to the lower grades in Banks, just up the highway,” Butler said. “He was a shy but pleasant young man. He always wore a tie and usually khaki pants. He was polite, respectful and humble. He did not get involve in trivial topics.”

Butler said, even while in high school, Lewis didn’t hesitate to stand up and speak up against injustices.

“John Robert didn’t mind to speak out against things that were being said,” Butler said. “He would say, ‘You know that ain’t right.’ He always spoke up for what was right,”

“Back then, the schools were segregated and the books that were available to the students at Pike County Training School were used and many with pages torn out.

“We had used Royal and Underwriter typewriters,” she said. “The keys would stick but we learned to type. We didn’t have opportunities to go on what you would call field trips except to go to the county fair once a year and a school picnic out in a nearby pasture.”

Butler said there was little interaction among the classmates after school hours.

“So, I don’t know anything about what John Robert did after he left school every day,” she said. “There wasn’t much for  young people to do back then except school work and chores around home.

“We graduated in May 1957 and, after that, we all went separate ways. I was in New York when John Robert spoke at the March on Washington. I couldn’t believe that was him. I was so proud of him.”

Butler said one of her proudest moments was when she had the opportunity to hear her former high school classmate speak at Troy University.

“And to have my picture taken with him,” she said. “John Robert Lewis never changed. He was always standing up for what was right. He never backed down from what he believed. He dedicated his life to public service. He fought for justice, for all of us. He made all of his classmates proud to have known him.”

J’ean Collins was born and grew up in the Bahamas. She laughingly said she is a Bahama Bohemian. “Bohemian means... read more