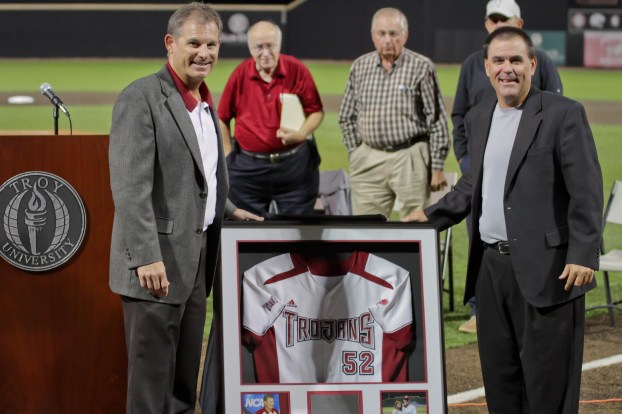 Pierce returning to where it all began

A familiar face will be making his return to a college dugout next baseball season. Former Trojan head coach Bobby Pierce will make his return to where it all started and be an assistant coach at Chipola College in Marianna, Florida.

A native of Marianna, coach Pierce became the youngest ever Florida Junior College head coach when he took over at the age of 23. Pierce won four conference titles and one state title during his time at Chipola.

After spending time at Alabama and Alabama-Huntsville, Pierce arrived at Troy in 2003. Pierce coached the Trojans for 13 seasons and finished as the all-time winningest coach in program history, passing the legendary Chase Riddle. He led the Trojans to four conference championships during his tenure. Pierce led the Trojans to a NCAA regional four times during his tenure. He had 10 winning seasons during his career with the Trojans and his teams broke the 40-win mark three times. Smartt coached 15 All-Americans and had 28 players sign professional contracts. He had 42 all-conference selections and two player of the year winners.

A pair of Trojans made news on Wednesday morning as linebacker Carlton Martial was named Preseason All-American and running B.J.... read more