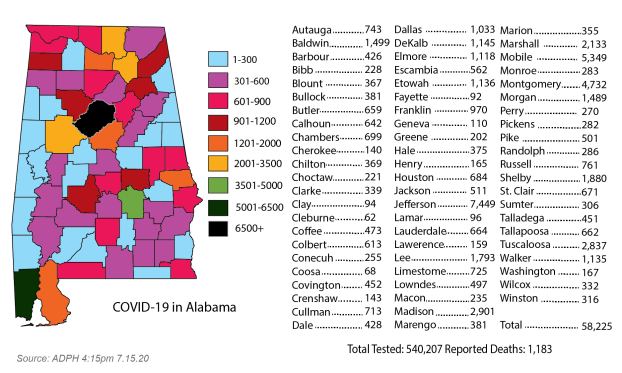 According to the Alabama Department of Public Health’s 10 a.m. update, an additional 10 positive cases were reported overnight with one additional death, bringing the county’s totals to 501 confirmed cases and six deaths.

Gov. Kay Ivey said during her 11 a.m. press conference that over the past 14 days, the total number of cases rose by 50 percent and the number of patients hospitalized continues to increase.

“A full third of all the cases we’ve had have been added in the past two weeks,” said Dr. Scott Harris, state health officers. “This is not a reflection of testing, because the percentage of the positive tests continues to go up …

“I think by next week we’ll see 16 to 17 percent of all tests coming back positive. We clearly have more disease circulating in the community.”

As of Wednesday morning, 1,477 COVID-19 patients were hospitalized throughout the state, with 541 under investigation. “And 30 hospitals in the state have very limited or no ICU capacity,” Harris said.

Amy Minor, chief clinical officer at Troy Regional Medical Center, said the hospital has not seen the high demand on resources that others have faced.

“It’s been sporadic as to number and acuity of patients we’re seeing,” Minor said.

The hospital has seen a significant uptick in testing, though, after deploying a rapid result test that produces a response within 24 hours.

“We are testing a lot of people,” Minor said. “Some days we’re testing up to 100 people per day.”

The hospital also has seen an increase in positive test results. “We were averaging about 10 percent positive results, and now we’re around 15 percent, some days more.”

All tests conducted at the hospital are scheduled through the COVID-19 hotline, which screens for symptoms or significant known exposure and schedules the drive-up testing.

“We’re also encouraging people to consider the timing of the test,” Minor said. “If you test too soon after a significant known exposure, you might get a false negative result.”

Because COVID-19 has a two- to 14-day incubation period, Minor said health officials recommend testing about five days after the known exposure, if the patient is asymptomatic.

“Because we schedule the times for the tests, you can call on Wednesday and schedule a test on Friday, if needed,” she said.