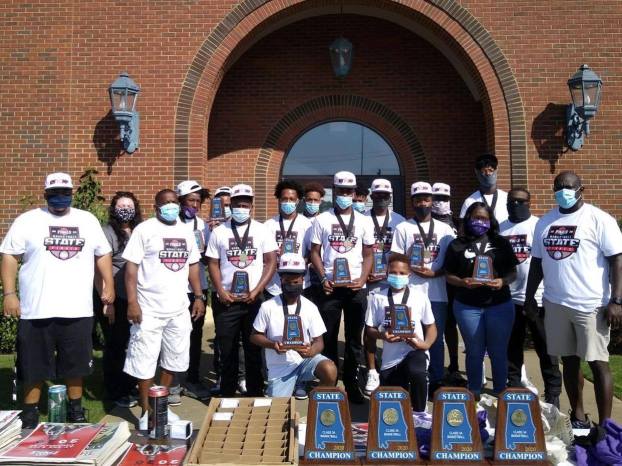 “It was extremely rewarding,” said head coach Doug Holland. “It was rewarding for the players considering everything that is going on. It felt so good for us to come together one more time as a team to get the rings. It was awesome.”

The Bulldogs took home their first state championship in February after knocking off Lauderdale County in Birmingham. Led by Andres Burney, Omar Cumberbatch and Ian Foster, the Bulldogs knocked off the Tigers 59-45. They never trailed in the contest.

The Bulldogs had an opportunity to celebrate with their rings earlier this summer, but with two of their teammates away at college, the players elected to wait until they could all be together.

“I can’t even describe it,” Holland said about the experience. “We had two players off to college to start training. The team decided to wait for them to come home. It felt good to come together one last time as a team.”

Even though four months have passed since his team stormed the court, the fact that the Bulldogs won a state championship hasn’t quite sunk all the way in for coach Holland.

“I watched the game for the first time in May,” Holland said. “I had a chance to watch both games and it kind of sank in then that we did something special. Even when the players got the rings they were still in awe.”

The Bulldogs lost teammate Reggie Edwards in an automobile accident early in the season. For the remainder of the season Holland and the rest of the coaches spoke on the importance of taking advantage of every opportunity and not to take anything for granted.

“They now appreciate things about life and they know how things can be taken so fast,” Holland said.

Holland and the Bulldogs presented Reggie’s mother a necklace in the form of the Bulldog’s state championship ring.

The Bulldogs are not resting on their laurels. They are already preparing for next basketball season; both mentally and physically.

“We have been holding workouts,” Holland said. “We have been preaching and asking the guys where do we want to go from here? We have done this, but what is our next goal. Are we going to be one or done? Or do you want to make another run at this?

By Lauren Johnson Many students are looking forward to returning to the Troy University campus in the fall, but are... read more