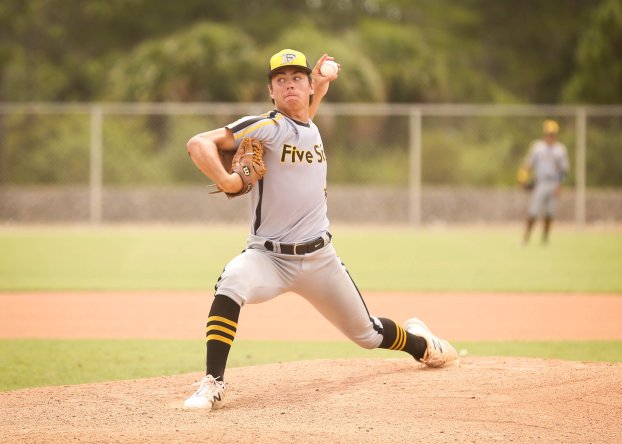 By candace nelson | The Messenger Drew Nelson delivers a pitch for 5-Star Nationals Burress during the BCS National championship.

Nelson ranked as state’s top recruit in class of 2022

Pike Liberal Arts pitcher Drew Nelson was ranked the top recruit in the class of 2022 by Perfect Game.

“Being a top recruit in the state of Alabama is very rewarding,” Nelson said.

Nelson made news earlier this spring when he announced his commitment to play baseball at Auburn University.

“It’s great to know that one of the nation’s top programs is interested in you playing for them,” Nelson said. “It validates all the hard work and effort to put into getting better on a daily basis.”

The Patriots will enter the 2021 baseball season with two players ranked in the top five in their recruiting class. Nelson’s teammate Mayes White was ranked as the state’s top shortstop and was ranked as the second best overall prospect in the class of 2021.

Nelson will use the news of being one of the state’s top recruits as motivation heading into next season.

“Now more than ever before, this drives me to continue to work to perfect my craft,” Nelson said. “There are a lot of great baseball players in our state and specifically in our area.”

It’s been over four months since the Pike County Bulldogs won their first ever basketball state championship. The Bulldogs celebrated... read more