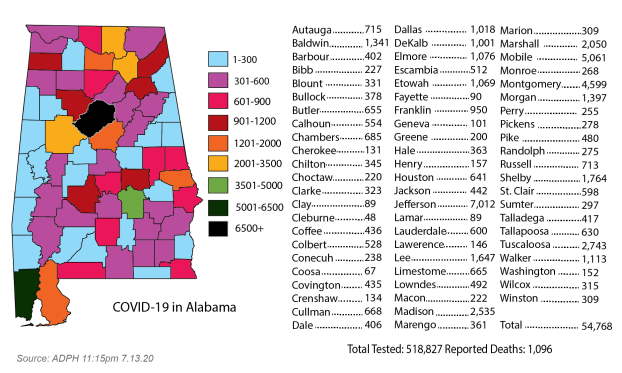 Alabama has added more than 10,000 cases of COVID-19 during the past week, ranking it 14th in the nation for per capita infection rate.

With 54,768 cases reported during the 10 a.m. Alabama Department of Public Health update on Monday, Alabama also ranks 19th in the nation for total number of cases, according to New York Times data.

According to ADPH data, 4,327 healthcare workers have tested positive for the virus since March, along with 4,632 long-term care facility employees and resid=ents.

Meanwhile, across the nation the resurgence of the coronavirus in the United States ignited fierce debate Monday about whether to reopen schools, as global health officials warned that the pandemic will intensify unless more countries adopt comprehensive plans to combat it.

“If the basics aren’t followed, there is only one way this pandemic is going to go,”said the director of the World Health Organization, Tedros Adhanom Ghebreyesus. “It’s going to get worse and worse and worse.”

Debate over the risks the virus poses, and how best to fight it, were spotlighted in Florida after it shattered the record among U.S. states for the largest single-day increase, with more than 15,000 newly confirmed cases.

Officials and health experts in hard-hit Miami pushed back against pressure, both from Gov. Ron DeSantis and President Donald Trump, to bring students back to classrooms next month.

“We just absolutely cannot risk the health of children, their well-being and safety, or any of our colleagues,” said Karla Hernandez-Mats, president of the United Teachers of Dade union and a middle school teacher herself. “We’re probably going to have to go to a full shutdown mode. I can’t see the schools reopening except with the 100% virtual model.”

Parents have until Wednesday to notify the Miami-Dade school district of their decision whether they will send their kids to school this fall or have them study online from home.

“Children can get the virus in their bodies and get contaminated just like anybody else,” said Florida International University epidemiologist Dr. Aileen Marty, who has been advising the Miami school district on its reopening plans. DeSantis has argued that children have not proven to be vectors for the disease and that if retailers like Walmart can be reopened safely, then schools should be able to as well. But he made those arguments with a notable caveat, saying that each county should make its own decision on reopening in consultation with local health officials. WHO officials cautioned that decisions on reopening schools should be made without political considerations, as part of a comprehensive strategy for battling COVID-19.

“We can’t turn schools into yet another political football in this game. It’s not fair on our children,” Dr. Michael Ryan, the organization’s emergencies chief, said Monday.

The debate is hardly limited to Florida.

“When I visited schools this morning I knew we were doing the right thing for children,” schools Superintendent Nikolai Vitti said, in a post on Twitter.

“COVID is not going away. Many of our children need face-to-face, direct engagement,” he said.

But lawyer Shanta Driver said she planned to file a lawsuit to stop the in-person instruction.

“I’m not going back until this pandemic is defeated. There is not a safe way to return to school while this virus is spreading uncontained,” said teacher Benjamin Royal.

Officials in California’s two largest school districts, Los Angeles and San Diego, announced Monday that students will stick to online learning from home when school resumes next month, rather than return to classrooms.

The districts cited research about school safety experiences from around the world, along with state and local health guidance.

“One fact is clear: Those countries that have managed to safely reopen schools have done so with declining infection rates and on-demand testing available. California has neither,” the districts said in a joint statement. Los Angeles, the second largest school district in the U.S., has about 730,000 students and San Diego serves about 135,000 students.

Shortly after the districts made their announcement, California Gov. Gavin Newsom expanded closure of bars and indoor dining statewide and ordered gyms, churches and hair salons closed in most places.

In New York, Gov. Andrew Cuomo said schools will be allowed to reopen in parts of the state where infection rates average 5% or less for two weeks. Students and teachers will be screened for illness, must wear face masks and keep 6 feet apart when possible.

“Common sense and intelligence can still determine what we do even in this crazy environment,” Cuomo said. “We’re not going to use our children as guinea pigs.”

In North Carolina, which reported its highest one-day number of cases and hospitalizations, Gov. Roy Cooper has asked school districts to prepare three re-opening plans that include options for in-person and fully rem

In the blinking of an eye, Richard Mays’ life changed. While unloading an antique dresser in the antique shop he... read more