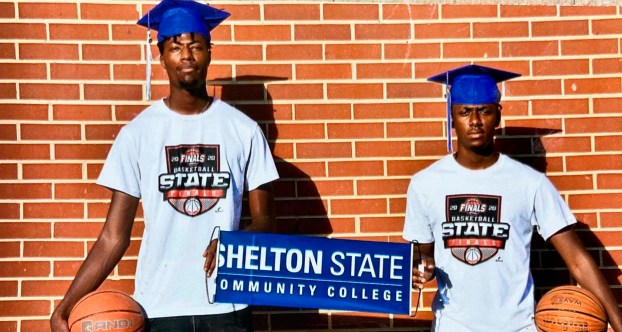 Submitted photo | The Messenger Andres Burney (left) and Jordan Hobdy (right) were teammates at Pike County. The two announced they will both be attending Shelton State.

After being teammates on the 2020 state championship wining Pike County basketball team, Andres Burney and Jordan Hobdy are both heading to Tuscaloosa to play basketball at Shelton State.

It’s a process that began during Pike County’s run at a state championship in February. Burney had already committed to Shelton and set out to make sure his future team knew about his current teammate.

“It happened right after the championship game,” Burney said. “I was already committed and I told them about Jordan and they said they needed a good point guard and we need someone like him.”

After accomplishing so much as teammates at Pike County both teammates are more than excited to continue their run together as teammates in Tuscaloosa.

“It’s going to be good because we know each other,” Hobdy said. “We are going to know some things that others may not know.”

“Even though he is a teammate, he is more like a brother,” Burney said. “It’s a good feeling to go with someone that I know.”

Burney and Hobdy finished their high school career in fine fashion when they hoisted the school’s first ever basketball state championship.

“It meant a lot to me because we are going down in history for winning the first state championship,” Burney said. “It means a lot too because it shows the younger guys that anything is possible as long as you work hard.”

Shelton State has had a history of success on the basketball court. They went 28-5 during the 2019-20 season and won the ACCC Tournament Championship just before the season was cancelled due to COVID-19. Hobdy and Burney hope to carry over their success at Pike County to their new team next season.

“We are going to bring them a championship,” Hobdy said.

“I want to win a championship in both years up there,” Burney said. “I like how they always have a target on their back. Their one of the best junior college teams in the state of Alabama.”

Tuscaloosa is a three-hour drive from Brundidge. The close proximity along with the size of the school was a big draw for Hobdy.

“It kind of feels like my high school. It feels like home and that’s why I picked it. It’s a good basketball school.”

By Lauren Johnson While many folks will watch the City of Troy Fireworks display on the Fourth of July, others... read more