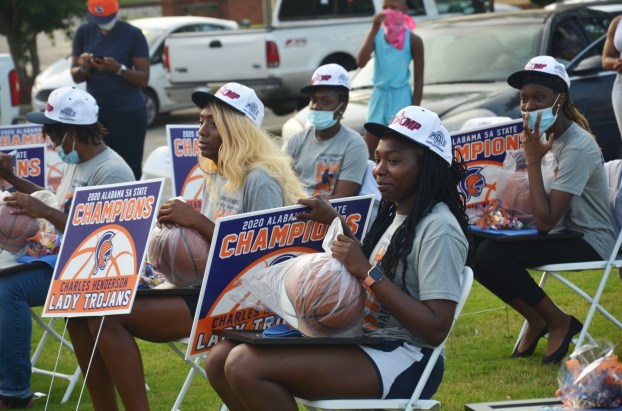 By Mike hensley | The Messenger Niaira Jones and the Lady Trojans celebrated their state championship on Tuesday night.

“It was just like a banquet,” head coach Dyneshia Jones said. “Because of COVID, we didn’t get to have a banquet. This was so fulfilling to have people around and I was able to talk about this team. Thanks to the city of Troy for everything.”

Coaches, players, family and city council members were all on hand across from city hall on Tuesday to celebrate not only another state championship but also an undefeated season.

“29-0 is special,” Jones said. “You can’t get any better than that. There is no way to top it. Those nine girls on the roster will always remember that.”

Members of the City Council, along with Mayor Jason Reeves, each spoke and congratulated the players during the ceremony.

“This was a long time coming,” Mayor Reeves said. “We have been waiting to celebrate you ladies and your championship for several months. We are incredibly proud of what you accomplished. I’m 48 years old and I have been following Charles Henderson my entire life. I have seen all the state championships in all the sports. I believe the greatest athletic accomplishment in the history of the school is what you ladies did.”

After each of the council members gave their congratulations, the three seniors, Niaira Jones, along with Mykyia Milton and Samira Moore, each had an opportunity to thank their coaches, teammates and their fans for their support this season.

“These past four years have had their ups and downs, but I’m truly blessed to end the season with a win,” Niaira Jones said. “There was never a dull moment playing with these girls and I’m going to miss them.”

“I would like to thank my coaches, the faculty and our fans,” Milton said. “I want to say thanks to my teammates. It’s an honor and a privilege to be associated with these girls who played the game so well. Most didn’t believe we could do it, but we did.”

“I want to thank everyone who believed in us when others made up their minds that we weren’t going to make it this year,” Moore said. “We had our tough times, but it was never anything we couldn’t overcome. This was one of my  favorite sets of teammates. We laughed together, sang together and danced together. Most of all we played together as a team.”

Most of the speakers on Tuesday night addressed the younger players on the team, who are tasked with replacing three key seniors.

“After every year you lose seniors,” Jones said. “That means the others have to step up and do the same thing.”

Pike County has recorded its fourth confirmed death related to COVID-19, and local officials say those numbers are likely to... read more