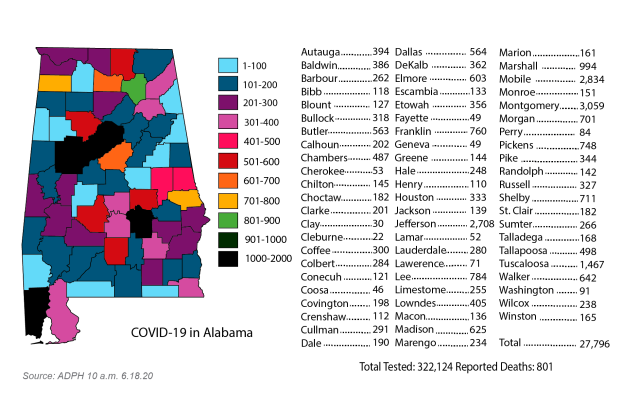 According to the Alabama Department of Public Health, the county had 344 confirmed cases of COVID-19 with the three deaths.  No details about the death were available.

With the addition of the two cases reported on Thursday, Pike County has confirmed 121 new cases in the past 14 days, with 1,019 tests reported. That’s a rate of 11.87 percent positive results on the tests conducted over the past two weeks.

Statewide, Alabama has a total of 27,796, having added 882 on Thursday, with 801 total deaths..  More than 100 of those cases were added in Montgomery County, where the mayor of Montgomery ordered masks to be work in public beginning Friday.

According to Bama Tracker, which analyzes the COVID-19 reporting data, the 14-day percentage of positive cases continues to climb statewide and was at 9.09 percent on Thursday

The 7-day average for new case statewide is 769 and the rate of new cases has increased by 47 percent in the past week over the prior week. The percentage of tests conducted in that same timeframe has increased by 12.6 percent.

More than 120,530 deaths have been confirmed due to the virus, including 590 new deaths on Thursday.