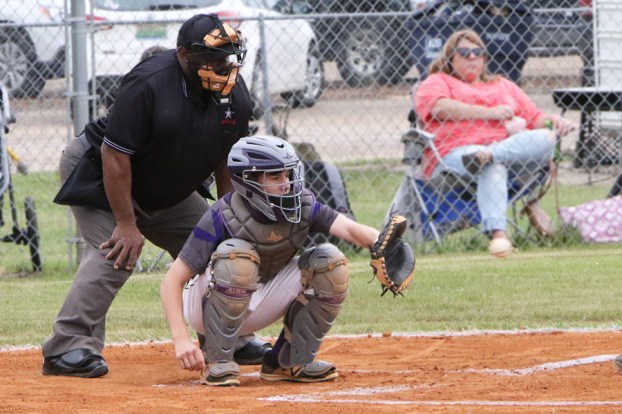 By april brown | The Messenger Goshen High School catcher Jeff Warrick sets up behind the plate for the Eagles in a game this past season.

After just playing just nine games in a coronavirus shortened season, Goshen rising senior Jeff Warrick is getting a chance to play a little more baseball this summer.

The Goshen catcher was selected to participate in the Alabama Baseball Coaches Association All-Star Event at Troy University’s Riddle-Pace Field next month.

The event will take place beginning on July 7 and ending on July 10. Warrick will be joined by some of the Southeast’s best prospects.

“It’s pretty exciting and It’s a good opportunity to be seen,” Warrick said. “I get to show people what I have.”

Warrick has plans to play at the collegiate level. Playing in this event, Warrick will have the opportunity to work with and learn from many college coaches.

“It’s a step in the right direction if I want to play in college,” Warrick said. “I get to play with and against new people and competition.”

This year’s event will feature more teams and a different format. There will be a total of 10 teams this year. The team rosters and schedule have yet to be released, but during the event, Warrick, along with the other players, will have the opportunity to stay on campus.

Warrick still has one year left at Goshen high school. The rising senior hopes to continue working both at the All-Star event and on his own heading into next season.

“I want to be able to make my team as good as it can be,” Warrick said.

The Pike County Chamber of Commerce Leadership Pike Class of 2019-2020 donated $2,500 to the Pike County Animal Shelter on... read more