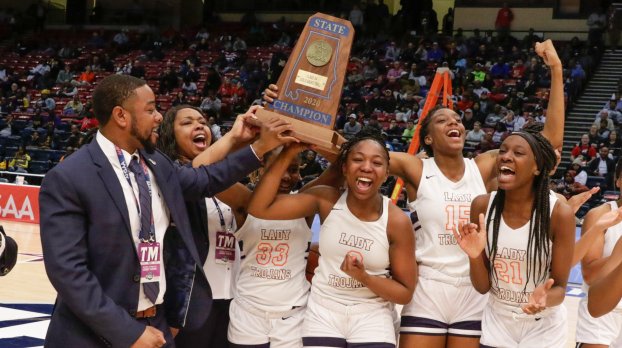 By dan smith | The Messenger The Charles Henderson Lady Trojans hoist the 2020 AHSAA Class 5A State Championship for the second time in three seasons.

City of Troy to honor the Lady Trojans

Nearly four months after hoisting the state championship trophy the Charles Henderson Lady Trojans are finally getting their celebration.

The Trojans will have their opportunity to celebrate with their fans on June 23 beginning at 6 p.m. in downtown Troy.

“We didn’t get to celebrate anything so this lets the girls know how much people appreciate what we have done,” head coach Dyneshia Jones said. “We worked hard for it, so this will be good for us.”

The Lady Trojans knocked off Madison Academy 50-48 in a slugfest inside the BJCC Legacy Arena in Birmingham back in February. The championship gave them their second state championship in three seasons and it capped off an undefeated season.

“You can’t get any beater than being undefeated and winning a state championship,” Jones said. “The girls had a good time. It was enjoyable for them.”

Shortly after winning the championship, the coronavirus made it’s appearance, pushing back the celebration.

The celebration will take place in the parking lot across the street from Troy City Hall.

Head coach Dyneshia Jones and the rest of the 2020 champions will be on hand to celebrate what may me the best season in program history.

After winning the area championship, the Trojans steamrolled their way through the sub-regional and regional rounds of the state playoffs.

After knocking off Ramsay and Sylacauga in Montgomery’s regional tournament, the Trojans took on Center Point in the Class 5A Final Four. Stifling defense and a fast-paced offense led to a comfortable 68-28 win, vaulting them to the state championship game.

Mykyia Milton and Samira Moore were also named to the All-Tournament team.

The lowest point in Caidra Owens young life brought her to the highest point she could ever have imagined. When... read more