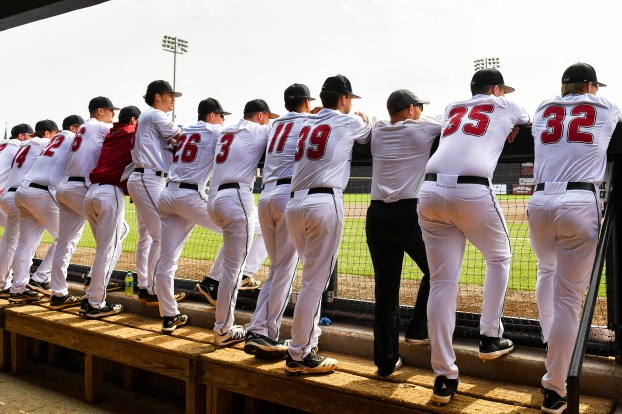 After sudden stop, Trojans looking ahead to 2021

The Troy baseball team would have been in Montgomery on Tuesday to begin play in the Sun Belt Conference Tournament at River Walk Stadium. Instead the Trojans are filling time without baseball and looking ahead to next season.

The Trojans were on their way to Statesboro, Georgia to begin conference play in March when they received the news to turn the bus around and head home.

The Trojans finished their season with a 9-8 overall record. Their final game came against Southern Mississippi in Montgomery. Despite losing to the Golden Eagles, Thomas believes his team was heading in the right direction.

The Trojans were riding into Statesboro after losing seven of their last eight games. Catcher Caleb Bartolero and the rest of the Trojans were hoping to use the series against the Eagles as springboard.

“It was very unfortunate,” Bartolero said. “We were all going out there and playing for the team. Going to Georgia Southern, we were like let’s turn this thing around. Lets start winning some games.”

The Trojans played just 17 games, but in those games, head coach Mark Smartt believes his team established some good things.

“Our record wasn’t what we hoped or needed (to be),” Smartt said. “We established some things and I thought we were prepared for the 30 game conference season.”

The Trojans are beginning to turn the page and are already turning their attention to the 2021 season.

“We can’t do anything about it; there’s a pandemic going on,” Trojan outfielder Rigsby Mosley said. “We just have to keep working every day and hopefully get another opportunity soon.”

Players are preparing for next season by staying in shape. Junior pitcher Junior Ortiz, who left Miami, has returned to Troy.

“Miami is basically shut down,” Ortiz said. “It’s impossible to do anything down there. I came back to Troy and now I get to work out again, throw and get ready for next season.”

Frederic has remained in Troy and has recently caught pitches from Thomas during his time off.

“He is my new favorite catcher,” Thomas said. “I think we need to give him a shot in the fall.”

“It’s awesome to be able throw and do things with Levi every day,” Frederic said. “I have really enjoyed catching his bullpen. I told him yesterday (Monday) that was the most fun I have had in a long time.”

When not on the field, players are spending time doing other things to help pass the time.

“For me, it basically consists of playing baseball on my Playstation and calling my friends, teammates and family,” Ortiz said.

Mosley is fairly new to the gaming scene. He is spending time playing Fortnight.

“I hadn’t played it that much,” Mosley said. “I have been getting into Fortnight a lot. Doing that and playing basketball with my younger brother is all I’m doing.”

There is plenty of hope that college baseball will be back next season and when it does, teams will feature experienced players at a rate the game hasn’t seen in years.

“I think there is going to be renewed interest in college baseball,” Smartt said. “It’s going to be an incredibly good product. You’re talking about returning experienced players, maybe more than anytime in our history. A lot of teams are going to be returning a lot of experience. I am going to have one of the older teams in the country. That experience, I think makes our game better.”

The Troy Trojans baseball team will welcome back six seniors from the 2020 roster to Riddle-Pace Field next February, while... read more